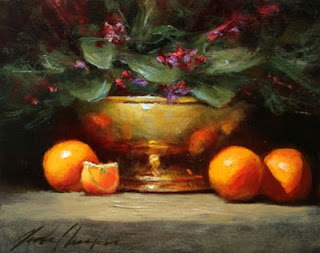 Every once in a while, life shows up with a word, a phrase, or an image, and a thread is established alongside the greater thread that takes me by surprise as it lays itself out there, as though it was there all along, I just hadn't yet seen it.  Several months ago, the word tangerine popped up and I wouldn't have paid a lot of attention except it's such a pretty word and I rarely hear it. I think it started with a song one of my sons sent me that he particularly liked at the time called, "Tangerine Sky," by the Kottonmouth Kings. It had a nice feel to it, a good beat, and I liked the words. Can you tell I grew up with American Bandstand?  Oddly enough, that was followed by another song that turned up in a roundabout way with the word 'tangerine' in it, "Lucy in the Sky with Diamonds," by the Beatles:

Picture yourself in a boat on a river,
with tangerine trees and marmalade skies.
Somebody calls you, you answer quite slowly,
a girl with kaleidoscope eyes.


I was always a big Sgt. Pepper fan, and who doesn't like the idea of tangerine trees?

At the time I didn't give it a lot of thought, but then it started showing up in other ways, all within the next couple of days. I'm not sure now what came next, but I think it was a poem sent to me via email by a friend, the poet, Jamie Ross, from his winter home in Mexico, where he closes the poem by mentioning tangerines.

That was followed by something on television. I don't watch much television, and I almost never turn it on during the daytime, but, on that day, I found myself turning it on. The Ellen DeGeneres show was in progress and she was doing some kind of routine involving hidden cameras, this one being in the "green room" (do they still call it that?) where the current celebrity who was going to appear was waiting. One of Ellen's aides came in with a bicycle and parked it there, then started a conversation with the celebrity, and no, I don't remember who, but he asked her what she thought of the bike and then asked, "What would you call the color?" It looked sort of red to me, maybe dark orange, but out popped "tangerine" from either the aide or the celebrity's mouth, I don't recall which one. I mean, who calls the color of a bicycle 'tangerine?'

Okay, I was starting to pay attention now. It usually takes three odd things to get me to do so. I noted it, marveled a bit at how the universe seems to operate, and off I went to run some errands, which included a stop at the bookstore, where I hoped to find a book of poetry that had piqued my curiosity. I didn't find that book, but I did find another, an anthology by Garrison Keillor of the Writer's Almanac, and so it came home with me instead. As I took it out of the bag and set it on the table, it fell open. And not just any old open. It fell open to a poem by Billy Collins, whose poetry I've long loved and it was a poem titled, "Fishing on the Susquehanna in July," which just happens to include these lines:

I have never been fishing on the Susquehanna
or on any river for that matter
to be perfectly honest.

Not in July or any month
have I had the pleasure -- if it is a pleasure --
of fishing on the Susquehanna.

I am more likely to be found
in a quiet room like this one --
a painting of a woman on the wall,

a bowl of tangerines on the table --


By then I was kind of getting used to the word 'tangerine' and it looked like it was going to stay around for a while. But, the next day it was gone and hasn't turned up since. Another interesting thing happened, though. On the same day I came back with the book of poetry, I thought about writing a post about this odd sequence of events and was going to title it exactly what I have. As I was telling a friend from Taos about it, including the possible title, I opened the book of poetry and found a book marker that the gal at the checkout counter had apparently slipped inside. On it was an image of Alice and friends in "Through the Looking Glass."

I can't pretend to know how the universe actually works, I just know it does, and sometimes it surprises me in the smallest ways that have no deeper meaning, other than to show how everything is connected. And then, sometimes, it shows me in ways that change my life forever.

~ "Tangerine Sky," by the Kottonmouth Kings


Posted by Teresa Evangeline at 8:44 AM