Carving Our Own Marble Monuments 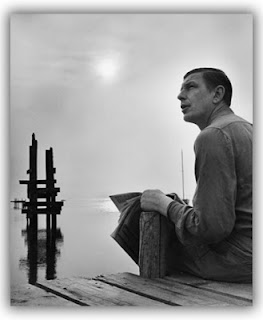 While perusing an old anthology of poetry that goes back to my college days of the 1970's, it was interesting to find that so many of the poems were essentially poems of protest, protest against the cultural changes that were encroaching on our lives and, of course, the war in Vietnam. Almost every poem was tinged with this desire to be heard, to have the heart understood.

I remember reading the poem below aloud to a class; I believe it was Oral Interpretation of Literature. It was such a long time ago, but I still recall it as one of my favorite classes. And though I once saw this as sad, if not a little disturbing, I must have also seen it as a call to action. I would venture to guess that it consciously or unconsciously helped to shape my life. It remains a strong reminder to never become The Unknown Citizen. Unknown to whom?  Unknown to one's self.

He was found by the Bureau of Statistics to be
One against whom there was no official complaint,
And all the reports on his conduct agree
That, in the modern sense of an old-fashioned word, he was a saint,
For in everything he did he served the Greater Community.
Except for the War till the day he retired
He worked in a factory and never got fired
But satisfied his employers, Fudge Motors Inc.
Yet he wasn't a scab or odd in his views,
For his Union reports that he paid his dues,
(Our report on his Union shows it was sound)
And our Social Psychology workers found
That he was popular with his mates and liked a drink.
The Press are convinced that he bought a paper every day
And that his reactions to advertisements were normal in every way.
Policies taken out in his name prove that he was fully insured,
And his Health-card shows he was once in hospital but left it cured.
Both Producers Research and High-Grade Living declare
He was fully sensible to the advantages of the Installment Plan
And had everything necessary to the Modern Man,
A phonograph, a radio, a car and a frigidaire.
Our researchers into Public Opinion are content
That he held the proper opinions for the time of year;
When there was peace, he was for peace: when there was war, he went.
He was married and added five children to the population,
Which our Eugenist says was the right number for a parent of his generation.
And our teachers report that he never interfered with their education.
Was he free? Was he happy? The question is absurd:
Had anything been wrong, we should certainly have heard.

Posted by Teresa Evangeline at 10:11 PM