Birdhouses in the Snow 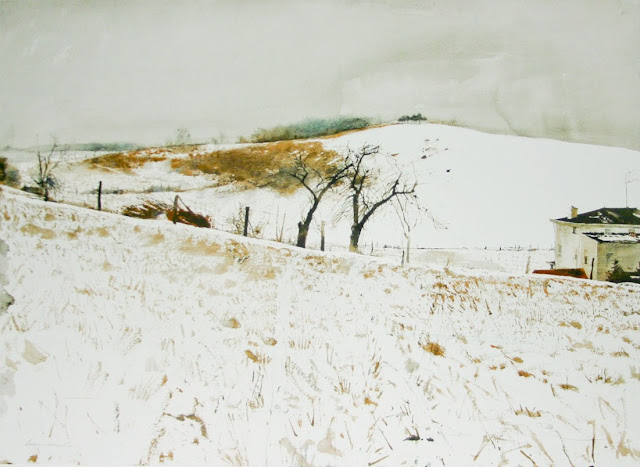 There are three, hanging from the lower branches of a basswood tree right outside my window. These tiny houses, teetering back and forth, buffeted by a late February wind like pendulums on wire fulcrums, take turns moving to the music. First, the white one with a blue roof sways in time to the falling stars of snowflakes landing gently at his feet. Then he rests as the yellow one with green roof turns towards him to signify her entrance, taking up the rhythm the wind has set in motion. The slightly larger white one with green roof, on the other side of the tree, keeps a steady beat next to the shiny bumblebee with wire baton who seems to be conducting the orchestra from his podium further out on the branch. Meanwhile, the rocks below continue to hum a bass line. As the snow increases and the tempo picks up, a solitary cluster of what at first appears to be dead leaves clinging to a nearby branch but are really brown leotards, begins to dance something wildly contemporary. The birdhouses, in fermata, silently watch as the audience, hanging on every note, breathlessly awaits the musical denouement. 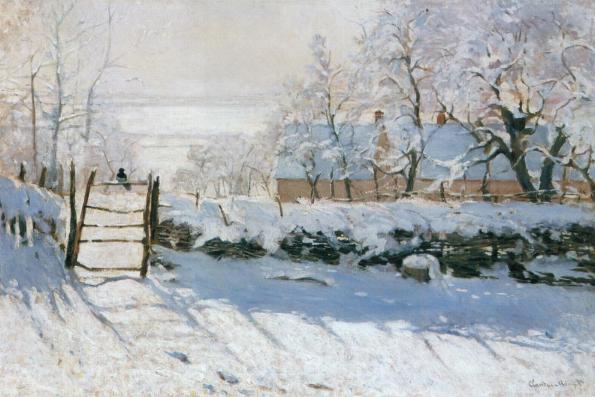 P.S. By some odd "coincidence," as I was looking up something else, the word fermata showed up. It's a musical term for holding a note for whatever duration the conductor decides, usually appearing towards the end of a piece. Another term for it is "Bird's Eye."  I couldn't resist.


Paintings:  "Fence Line," by Andrew Wyeth, and, "The Magpie," by Claude Monet
Posted by Teresa Evangeline at 12:32 PM 28 comments:

How the World Works When We Let It 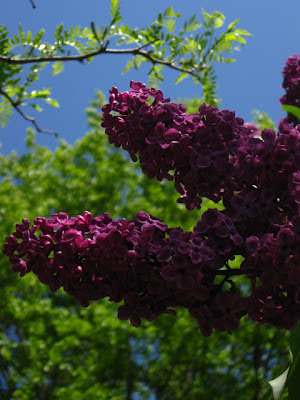 My Husband Never Takes Me Anywhere

so I sometimes, you understand,
envy my city friends who have
Twyla Tharp,
"Long Day's Journey Into Night,"
and Wynton Marsalis
at their fingertips.
Oh, I know,
we went for a jeep ride
up the Ramsey Road
stopping at the beaver pond
just in time to see
a flock of mergansers settle in.
And we walked the length of Indian
Island last July,
picking Indian paintbrush and wading
in the back cove.
And just this spring
we rode our bikes to Willow Creek
where the fish were running.
So many you could catch them with
your hands.

Another season goes by.
I guess
Grant Wood,
"Moon for the Misbegotten,"
and Baryshnikov
will have to wait again.
You see, it isn't easy
having a husband who never takes you
anywhere.
I have to settle for
bald eagles circling the white pines
across the "second bay,"
bumblebees buzzing the lilacs on the
bank,
and riding with George
as he steers our canoe
through a slice of silver moon
on Whitefish Lake.


I am Teresa Claire Coughlin, or was in an earlier "incarnation."  This poem was published one summer in the mid-1980's by The Christian Science Monitor. This international and well-respected newspaper would sometimes publish unknown or little known poets as well as poets of some note on their Home Forum page. I belonged, of course, in that first category. But, about a week after my poem was published, they published one by Ted Hughes. I felt I was in awfully good company, poetically speaking.

I can still recall how happy I was when I walked the half mile to our mailbox at the end of the road to find an acceptance letter from them which read (believe me, I remember this), "We would be delighted to publish your poem..."

George and I, married for ten years, divorced now for over twenty, have remained friends, for which I'm very grateful, and not just because of our son, Coleman, but because it's how the world should work when relationships change, how the world does work when we let it. 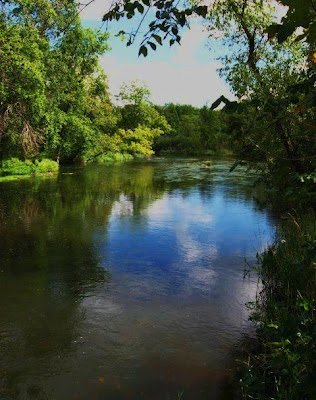 The images are my own, taken last spring, of my place along the river.
Posted by Teresa Evangeline at 12:12 PM 82 comments:

Angels in the Treetops 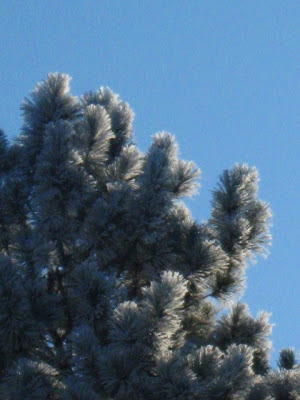 A few days ago, while returning from a walk with Buddy through the meadow, made even more perfect by those beautiful old Norway pines standing nearby, I noticed the treetops leading back to the house and how they sparkled in the sunlight. I couldn't resist taking their pictures. 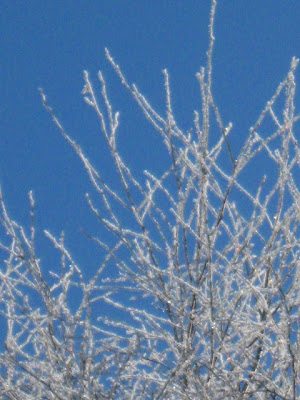 When I was back at my table, in the warmth of the kitchen, I opened a book of poetry by Mary Oliver that I'd purchased the day before and found this poem:


"About Angels and About Trees"

Where do angels
fly in the firmament,
and how many can dance
on the head of a pin?

Well, I don't care
about that pin dance,
what I know is that
they rest, sometimes,
in the tops of trees

I have lost as you and
others have possibly lost a
beloved one,
and wonder, where are they now?

The trees, anyway, are
miraculous, full of
angels (ideas); even
empty they are a
good place to look, to put
the heart at rest -- all those
leaves breathing the air, so

peaceful and diligent, and certainly
ready to be
the resting place of
strange, winged creatures
that we, in this world, have loved.

Even now, on this cold winter day, it's not difficult at all to imagine them there, resting among the shining treetops. 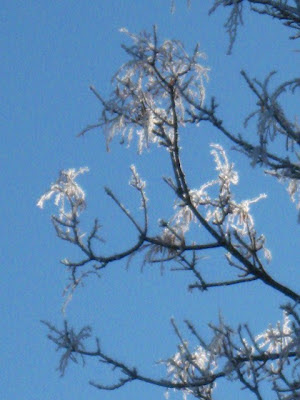 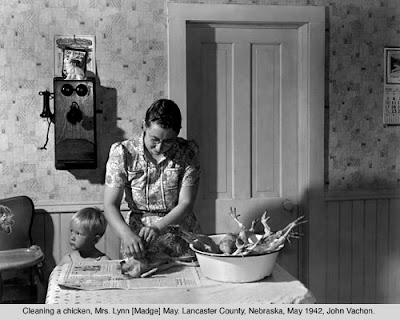 It was a warm afternoon in late August and my siblings had just gone back to school when my father, who was driving over to the neighbors, asked if I wanted to ride along. I don't recall our business, probably something to do with cows, horses, or hay, but he was going over to see Otto, who lived just off the highway about two miles away.

So, there we were, being neighborly, chatting in the kitchen with Elsie, Otto's wife, and a couple of womenfolk I didn't know, waiting for Otto to come in from the fields. I don't recall the conversation as I hadn't been paying any attention to it.  All my senses had been diverted to the ungodly smell invading Elsie's kitchen.

You see, it was getting near suppertime and chickens were being plucked, a job made a whole lot easier by the metal tub full of scalding hot water which sat on the table in front of Elsie. It was a warm day and, despite sitting close to the screen door, the stench of hot, wet chicken feathers, mixed with the heat in that kitchen and what was probably more than a little bit of blood, quickly became unbearable. I was sitting very close to my father, trying not to watch the process of plunging and plucking, plunging and plucking, hoping I could stave off the adverse reaction rising within me. Despite being a farm girl and having been around chickens all my young life, those might well have been the longest minutes I'd ever passed, my own little preview of hell.

Just when I thought it couldn't get any worse, it did. Elsie asked my father if we'd like to stay for supper. My heart stopped as I waited for his answer. Possibly sensing that I was quickly reaching the point of no return, he gently nudged my leg with his as he said thanks, but no, we'd be going on home.  Perhaps he heard my exhalation of relief as I began breathing again and my heart resumed its beating.

A few minutes later, he opened the screen door and we stepped outside, leaving that kitchen far behind us. I followed him out to the barn where Otto was just coming in on the tractor. You might be thinking, 'Surely a barn can't be an improvement on a kitchen,' but you would be wrong. I was used to barns and actually enjoyed spending time there, watching the little chicks under the heat lamp every spring, building forts among the hay bales, the smell of warm milk, fresh from the cows, as it hit the metal pail. While they talked business, I passed the time playing with a mama cat and her kittens in the grassy shade of the barn door.

Later, when we were safely ensconced in the car, he turned to me with that smile and the slightly conspiratorial tone he used when he wanted me to feel we were in something together, and said, "Were you afraid I might say yes?"  I can see myself even now, all these years later, looking down at my hands in my lap, and nodding yes. My father laughed, as I smiled and breathed deeply that sweet summer air coming through the open car window, then we turned onto the highway and headed for home.


Here's a little "Cash" for the trip home: http://www.youtube.com/watch?v=HcGpkcOJBA0

Looking back from the vantage point of time and experience, I have deep respect for these people and their way of life. Many are returning to it. Some never left.

And no, those aren't chickens on my sweater.  They're ducks. 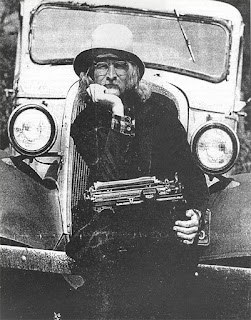 2. Find a place to sleep where it is quiet,
and sleep there.

3. Reduce intellectual and emotional noise
until you arrive at the silence of yourself,
and listen to it. 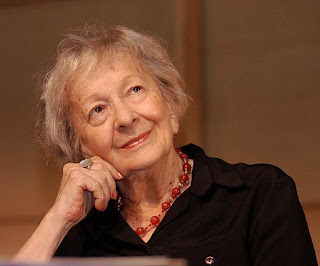 Several months ago, I wrote down a poem in my notebook thinking that one day I might want to post it. I would look at it from time to time, but the right time never seemed to appear. I liked the poem, yet I had questions about it. I looked at it again a few days ago. Still not the right time. Well, unfortunately, today seems to be the right day.

"A Contribution to Statistics"

Out of a hundred people

those who always know better
--fifty-two

doubting every step
--nearly all the rest,

glad to lend a hand
if it doesn't take too long
--as high as forty-nine,

able to admire without envy
--eighteen,

suffering illusions
induced by fleeting youth
--sixty, give or take a few,

not to be taken lightly
--forty and four,

living in constant fear
of someone or something
--seventy-seven,

harmless singly, savage in crowds
--half at least,

cruel
when forced by circumstances
--better not to know
even ballpark figures,

wise after the fact
--just a couple more than wise before it,

taking only things from life
--thirty
(I wish I were wrong),

hunched in pain,
no flashlight in the dark
--eighty-three
sooner or later,

righteous
--thirty-five, which is a lot,

mortal
--a hundred out of a hundred.
Thus far this figure still remains unchanged.

Ms. Szymborska passed away today at the age of 88, at her home in Krakau, Poland. Awarded the Nobel Prize for Literature in 1996, she was referred to as "the Mozart of poetry" by the Nobel committee. Last year, she was awarded Poland's highest distinction, The Order of the White Eagle. I like that. That sounds like a fine honor to have bestowed upon a person.

Mortal?  It would seem so. But, I am hoping she is just out of sight, still here, still moving,  "Into unfathomable life." * 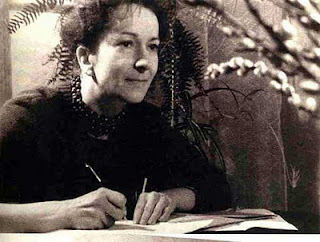