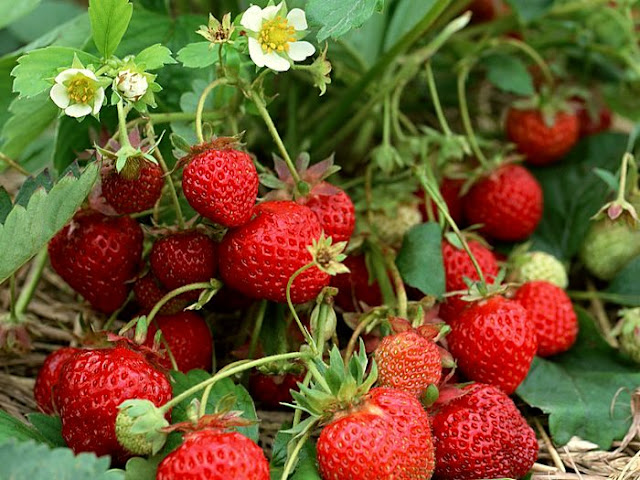 A friend recently introduced a poet who was entirely new to me, a poet with whom I felt an immediate affinity. When this happens, it's as though I've been given a delicious, but temporary secret which must be held and cherished for a while before sharing. I think it's time.

The poet, Max Garland, arrived in this world via Kentucky, where he spent fifteen years as a rural mail carrier. Perhaps this spoke to me, in part, because my grandfather, Moses, who raised sheep, was also a rural mail carrier, although a couple of generations earlier. It seems we are arriving at a time when both writing and distributing letters is coming to an end. I wish it were not so, but life goes on and now I wouldn't want to live without the immediacy of email. So, a price is sometimes paid, a new way emerges and we become accustomed.

Max is now living and teaching in Wisconsin, and is the poet laureate of that state. He has two books of poetry published, which I have on the table next to me. I read from them a little each day, lingering over each line, sometimes each word, as I recall days so similar in their nature that I could be reading from my own diaries or journals.

It's been difficult for me to choose the right poem to share here, as I know you would like so many of them, but just this morning I ran across this poem and knew it was the one. I was reminded of my grandfather and a particular day when I was very young. We walked down the cow path in our pasture to where the raspberries grew, wild and untended, ripe and ready. I recall sawdust on the ground from an old sawmill, the sun shining brightly, my grandfather bent towards the vines, filling his bucket with sweetness. There was a sense of enduring goodness, and I'm happy to say strawberries and raspberries still fill my summer days...

Now, I'll be quiet and let you read.

Whatever is truly delicious
cripples

according to a local Baptist proverb.
Whatever bides its life

under the leaves, patiently
undoing the bitter

green knot of itself, swelling outward,
deepening, reddening. Whatever ripens

in the sun, shaping itself
into a tiny version of the heart,

the sweetness at a berry's core
leaking slowly through the flesh.

We had nearly a half-acre to pick,
my grandfather and I, crawling

or stooping through the long rows.
Not much passing between us --

the faint snapping of the fruit
from the stem, the occasional

judgment of cigar smoke
trailing back to where I lagged,

teaching the body to bend. The arc
of my grandfather's back, for example,

repeated the story of strawberry gathering,
spring after spring. Whatever is delicious

draws the man from the body, is the proverb,
coaxing the long, elderly nerve

through all the meandering hoops
of the spine. Until

after a while, my grandfather
thought it would be a good idea

to rest there. He thought
it would be a good idea to lie down

among the berries. According
to the Baptists, whatever it is

invites us, can almost taste us
near the end. He thought

of the berry vines. Just for a while,
my grandfather thought. Just until

his mind was sweetness.
Just until his body was straw.

On my other blog, teresaevangelinespoetry.blogspot.com , I've posted a micropoem, one I wrote a few months ago, that seems to dovetail nicely with this post. I hope you'll visit me there... 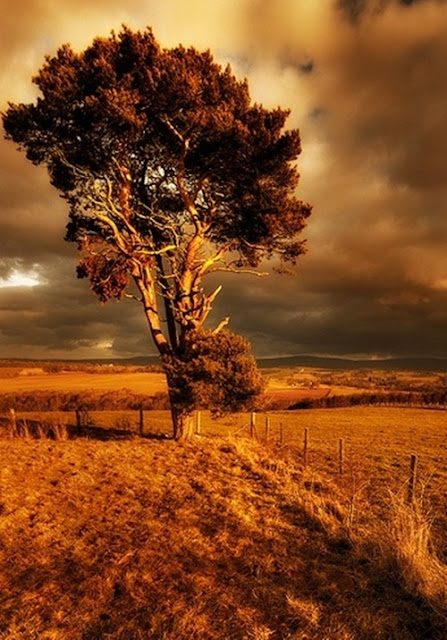 My love for trees continues unabated. Every time I walk through the meadow with Buddy and then enter the grove of large Norway pines, I stand for a few minutes and take them in. I breathe their air, feel their weight and the strength of life in their trunks. Yes, I have hugged them, even prayed to them. If there is divinity in this world, it's right there in the bark and the branches.

This morning, I came across this wonderful excerpt from Herman Hesse and wanted to share it with you. It looks like a commitment to read but I don't think you'll be sorry. It reads so beautifully and is well worth the time:


For me, trees have always been the most penetrating preachers. I revere them when they live in tribes and families, in forests and groves. And even more I revere them when they stand alone. They are like lonely persons. Not like hermits who have stolen away out of some weakness, but like great, solitary men, like Beethoven and Nietzsche. In their highest boughs the world rustles, their roots rest in infinity; but they do not lose themselves there, they struggle with all the force of their lives for one thing only: to fulfill themselves according to their own laws, to build up their own form, to represent themselves. Nothing is holier, nothing is more exemplary than a beautiful, strong tree. When a tree is cut down and reveals its naked death-wound to the sun, one can read its whole history in the luminous, inscribed disk of its trunk: in the rings of its years, its scars, all the struggle, all the suffering, all the sickness, all the happiness and prosperity stand truly written, the narrow years and the luxurious years, the attacks withstood, the storms endured. And every young farmboy knows that the hardest and noblest wood has the narrowest rings, that high on the mountains and in continuing danger the more indestructible, the strongest, the ideal trees grow.
Trees are sanctuaries. Whoever knows how to speak to them, whoever knows how to listen to them, can learn the truth. They do not preach learning and precepts, they preach, undeterred by particulars, the ancient law of life.
A tree says: A kernel is hidden in me, a spark, a thought, I am life from eternal life. The attempt and the risk that the eternal mother took with me is unique, unique the form and veins of my skin, unique the smallest play of leaves in my branches and the smallest scar on my bark. I was made to form and reveal the eternal in my smallest special detail.
A tree says: My strength is trust. I know nothing about my fathers, I know nothing about the thousand children that every year spring out of me. I live out the secret of my seed to the very end, and I care for nothing else. I trust that God is in me. I trust that my labor is holy. Out of this trust I live.
When we are stricken and cannot bear our lives any longer, then a tree has something to say to us: Be still! Be still! Look at me! Life is not easy, life is not difficult. Those are childish thoughts. Home is neither here nor there. Home is within you, or home is nowhere at all.

A longing to wander tears my heart when I hear trees rustling in the wind at evening. If one listens to them silently for a long time, this longing reveals its kernel, its meaning. It is not so much a matter of escaping from one’s suffering, though it may seem to be so. It is a longing for home, for a memory of the mother, for new metaphors for life. It leads home. Every path leads homeward, every step is birth, every step is death, every grave is mother.
So the tree rustles in the evening, when we stand uneasy before our own childish thoughts: Trees have long thoughts, long-breathing and restful, just as they have longer lives than ours. They are wiser than we are, as long as we do not listen to them. But when we have learned how to listen to trees, then the brevity and the quickness and the childlike hastiness of our thoughts achieve an incomparable joy. Whoever has learned how to listen to trees no longer wants to be a tree. He wants to be nothing except what he is. That is home. That is happiness. 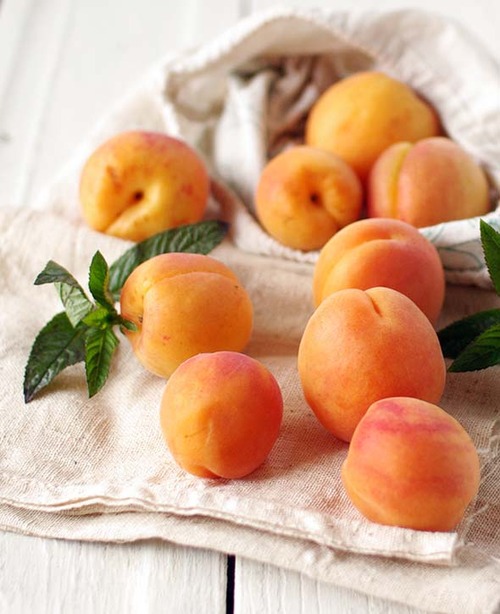 I have always loved buying fruit at roadside stands, pulling the first peach of summer from a paper bag and biting into its sweetness. Then, later, I sit at the kitchen table and have another, one with cream and sugar, old-fashioned decadence in a small white bowl.

From blossoms comes
this brown paper bag of peaches
we bought from the boy
at the bend in the road where we turned toward
signs painted Peaches.

From laden boughs, from hands,
from sweet fellowship in the bins,
comes nectar at the roadside, succulent
peaches we devour, dusty skin and all,
comes the familiar dust of summer, dust we eat.

O, to take what we love inside,
to carry within us an orchard, to eat
not only the skin, but the shade,
not only the sugar, but the days, to hold
the fruit in our hands, adore it, then bite into
the round jubilance of peach.


Li-Young Lee is a contemporary poet.

No known attribution for the photograph.
Posted by Teresa Evangeline at 12:00 AM 26 comments: