The Bicycle in the Woods 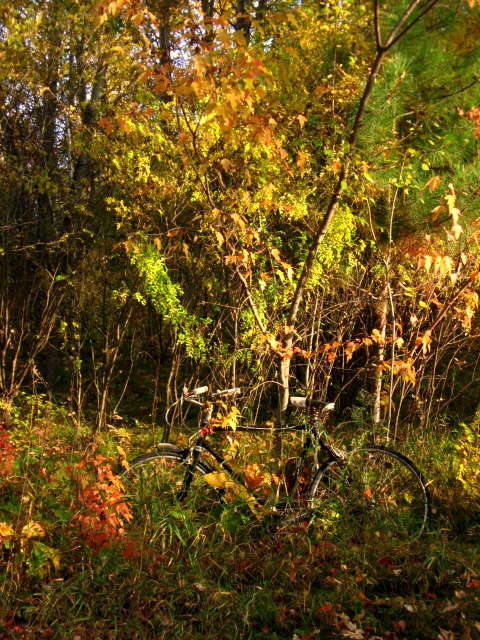 When I was younger, I thought life would never be complete if I didn't do a lot of traveling in Europe and elsewhere around the globe; that it would at some point have to include riding a bicycle down a winding country road in Italy to a small village where I would stop at the market for fresh bread. Or, I would wake up in a canopied bed somewhere in the south of France with fields of lavender outside my window, far as the eye can see. Or, some morning I would find myself having breakfast in a canvas-covered tent with a giraffe looking over my shoulder on the plains of the Serengeti.  None of which I've yet to do. The wonderful thing I've discovered is that I don't have to do those things. I've done those things in my mind's eye and, having done so, something has come alive that cannot fade away: life can be well-lived right where I'm at.

Just a few days ago, I watched as a black squirrel made its way across the lawn again and again to hide acorns in the ground below the bird feeder. I suppose that seemed like a good place to hide them. He dug a little hole by scratching the dirt away, dropped the nut inside, then took his little paws and covered his cache, smoothed out the dirt and then fluffed the grass ( he actually fluffed the grass!), so as to hide it from others. Then, he brushed the dirt from his hands, literally, and then went back for another round of finding and hiding. I had never witnessed this before and found it absolutely fascinating. Do you see? I would not have been able to witness that if I was riding a bicycle in Tuscany, or sleeping soundly in Provence. I would be experiencing other things, but not that thing. And that thing was a thing of beauty - so simple, yet profound!

In a way, the world has come to my door. It's not the one I expected but it is the one I needed, the one that has brought me immeasurable peace.

Posted by Teresa Evangeline at 6:24 AM