The Nature of Distraction 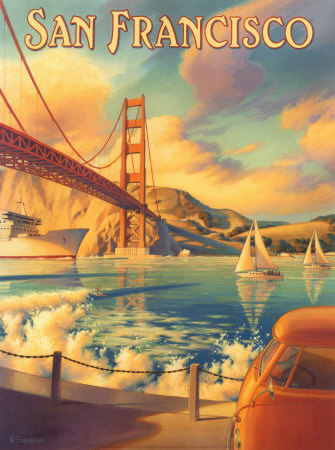 When I read the poem, "San Francisco Remembered," earlier today, I couldn't help laughing out loud. The sweet honesty with which the poet shares his ability to be so easily distracted was most refreshing, his use of imagery to bring his main idea into focus again and again is the stuff out of which good writing is made. While sitting with it for a minute, I recalled a conversation I had recently with a friend in which we were talking about, among other things, Hank Thompson and his song, "The Wild Side of Life," which Kitty Wells answered with a song of her own, "It Wasn't God Who Made Honky Tonk Angels," way back in the before time, when country and western music was really country and western.

That prompted me, albeit in a rather roundabout fashion, to think in terms of an answer to this poem in the form of my own distractions. I'm not immune to such things. So, while I think about that and the approach I might take to this little exercise, you go ahead and read the poem. Perhaps you'll come up with some thoughts of your own along these lines.

But don't be looking for that post any time soon. You know, distractions and all ...

In summer the polleny light bounces off the white buildings
& you can see their spines & nerves & where the joints knot.
You've never seen such polleny light. The whole city shining
& the women wearing dresses so thin you could see their
wing-tipped hips & their tall silvery legs alone can knock
your eye out. But this isn't about women. It's about the city of
blue waters & fog so thick it wraps round your legs & leaves
glistening trails along the dark winding streets. Once I followed
such a trail & wound up beside this redheaded woman who
looked up & smiled & let me tell you you don't see smiles like
that in Jersey City. She was wearing a black raincoat with
two hundred pockets & I wanted to put my hands in each one.
But forget about her. I was talking about the fog which steps
up & taps your shoulder like a panhandler who wants bus fare
to a joint called The Paradise & where else could this happen?
On Sundays Golden Gate Park is filled with young girls strolling
the transplanted palms & imported rhododendron beds.
You should see the sunset in their eyes & the sway, the proud
sway of their young shoulders. Believe me, it takes a day or two
to recover. Or the trolleys clanking down the steep hills—
why you see legs flashing like mirrors! Please, Lord,
please let me talk about San Francisco. How that gorilla of a
bridge twists in the ocean wind & the earth turns under
your feet & at any moment the whole works can crack
& slip back into the sea like a giant being kicked off his raft
& now, if it's all right, I would like to talk about women …


~ Philip Schultz, from The God of Loneliness: Selected and New Poems, Houghton Mifflin, 2010


Posted by Teresa Evangeline at 9:40 PM