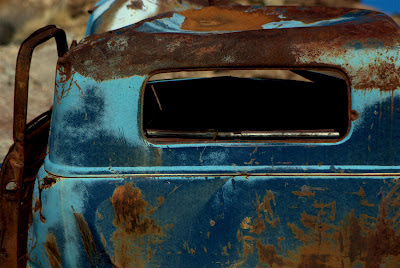 I like this Juan Bernal fellow, the man with the plan. I like his ... panache. In the end he was, in so many ways that matter, driving his own "get-away car."

I write a letter for my client today.
I sit with him on the deck
of the skilled nursing facility.
He eats breakfast, smokes cigarettes.
He wants me to write to his baby brother
in jail doing time.
He dictates: "I love you —
I need a thousand dollars —
I will drive the get-away car."
He has these plans
he needs to convey—tells me
his little brother will tote the gun.

He dictates: "The doctor told me today
I am dying, but he doesn't know
how long it will take."

It is doubtful he will be able to drive
the get-away car when his legs are paralyzed
and two people have to transfer him
from his bed to his wheelchair and back.
He has a direct line morphine drip
he presses every ten minutes.

It is doubtful he will make it
home again, but he wants to go home.
He drifts in and out of sleep, nodding-out
his thoughts stop in mid-sentence,
he loses track of his message to his brother.

He asks if they'll read the letter.
The jail will, I say. He edits out the question
about whether his brother killed someone.
He thinks he did. I suggest he
take out the part about robbing a bank
but he doesn't. He thinks it's a good plan.

Ms. Weaver is an American poet living in Seattle where she works in HIV/AIDS services. She believes, as do I, "Time is more valuable than money."

Posted by Teresa Evangeline at 12:48 PM