This is Not Our Fate 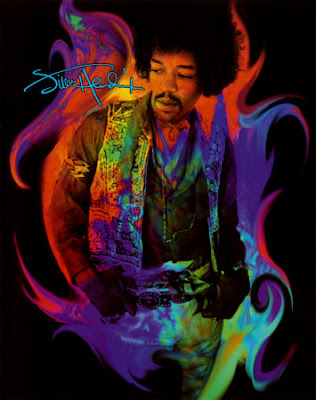 Forty-two years ago today, I was sitting in a cafe in my hometown when a carload of friends showed up. I'd never been much of a party-er, but some of them were. Truth be told, I had stayed home most nights and watched Bobby Darin and Dean Martin's variety shows on television. In my wilder moments I fancied myself a flower child. When that car showed up I was somewhere in between.

My friend, Stan, jumped out followed by Ronnie and a few others, then Stan admitted to being "stoned." I had an inkling what that meant but had never experienced it, yet. I was a little taken aback, as hearing that Stan was stoned had never entered my mind. Yet, there it was, and he seemed so happy! How could I not be happy for him?  He said there was going to be a party at Ronnie's. Did we want to go? We (we being a story for another time) decided 'why not?'

We arrived shortly after the party had started. As we walked through the front door, Ronnie, party host, informed us that Jimi Hendrix had died. Although I wasn't a huge Hendrix fan, I knew it was more bad news for the music scene. On the wall behind Ronnie was a poster of Hendrix, colorful and still full of life. It was an odd juxtaposition. I can still see myself standing there, not sure how to take it all in.

Leap ahead many years, we're talking twenty-five years, and I'm living out at my farmhouse in Ansel. My youngest son, Coleman, is eleven years old. He's just started to pick up the guitar my older son, Trevor, had left for him to mess around on. I'm standing in the kitchen, as I seem to be doing a lot of in my life, and he walks in, guitar in hand, and asks me to listen to something. Then he plays, note for elongated note, Jimi's version of "The Star-Spangled Banner," Woodstock style. I was elated! And then I was concerned. My son, precocious thing that he was, had just escaped my clutches and there was no turning back. He now has a band of his own, has had since he was thirteen.

During the time I lived in Ansel, I had Jimi's "All Along the Watchtower" as my answering machine message, and I do mean answering machine. Remember when we had machines with a cord to the phone and a tiny little cassette tape for taping and receiving messages?  I still have mine. Don't ask why. Anyway, during that time, I had my first and only colonoscopy. One day, while I was at work, the doctor who did the colonoscopy (I thought he was kind of cute, which didn't match well with the whole colonoscopy thing) called and left a message on it. First, he told me he was a Hendrix fan and that he liked my answering machine song and then he followed it with nothing but good news.

And there you have it. Perhaps the only Jimi Hendrix and colonoscopy story you'll ever read. Aren't you glad I got that over with?
Here's Jimi ...
https://youtu.be/qmGFFJtkDXA

I'd like to dedicate this post to Stan. He left this world several years ago now, complications from diabetes. I've mentioned him in a previous post. He was a gorgeous thing. His mother was Native American, his father, Cuban. Before he left, we became even better friends, graduating from the same college on the same day in the spring of '75. No, we never had a "relationship," but we did love each other in that best of all possible worlds. What would he think of my mentioning him along with Jimi and colonoscopies? I think he's smiling right now. I know he is. And he's very happy for me on This September day.

Posted by Teresa Evangeline at 11:33 AM