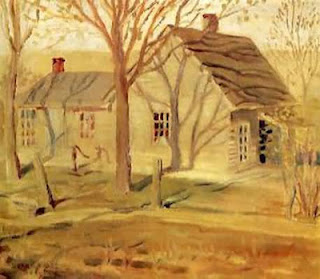 When I was very young, no more than six or seven, after watching my mother iron my father's clothes, even the handkerchiefs, I asked her if I could iron, too. I think it was the rhythmic yet precise movements I wanted to experience. And so, with what surely must have been a mixture of feelings - trepidation melding with the desire to encourage my interest in the necessary, but mundane - she left a small pile of handkerchiefs for me to iron. I could barely see above the ironing board, set up on the back porch, next to the chest freezer, where several summers in the future, a boy I liked would tell me he liked me, using the lyrics of a song. But, that long ago summer, I accidentally jostled the board and in a split second the tip of the iron fell on my wrist. As my mother applied a salve - another mixture, this one tinged with regret - I reassured her it was alright. Over fifty years later, I stand here in my kitchen, turn my wrist, and see it there: a faded triangle of silver nestled between two muted blue lines that form a 'y,' like a fork in the road. I look up and a triangle of silver light has sliced through the branches of a very tall Norway pine and settled on the rough bark. It's still morning on that back porch and here in my kitchen.

Painting by Grant Wood
Posted by Teresa Evangeline at 11:59 AM