Standing Inside the Rain 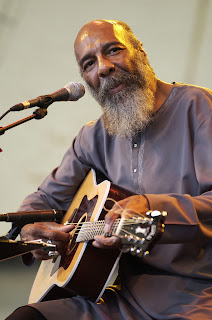 Well, I suppose I should follow my Hendrix story with my unrequited love for Richie Havens story. I don't think a Woodstock theme is emerging. Time will tell.

It began many years ago, as most memories seem to these days. It was in the '70's and I was watching a television talk show. Couldn't tell you now which one, but Richie was a guest. In the course of the conversation he mentioned that he could remember being nine months old and he described this memory to the interviewer. Not knowing much about Richie, my ears perked up and it made me want to pay closer attention. There was something about his presence, even through the television, that reached out and touched me in ways I couldn't explain. Later, I would describe it to myself as a spiritual presence that seemed to enshroud him, in a very gentle way. I wasn't into auras, it was a feeling. Every time I saw him on television or listened to his music, there it was, same feeling. It didn't go away.

Then, in October of 1992, a whole bunch of musicians got together at Madison Square Garden and celebrated thirty years of Bob Dylan's music. Neil Young dubbed it Bobfest and it stuck. It was shown on PBS and I think I still might have it on VHS. That was a while back, and won't be viewed again in that format. The main reason I wanted to hang onto and re-watch portions of it, on more than one occasion? Richie Havens. He performed Dylan's song, "Just Like a Woman." I was transfixed, repeatedly.

A few years later, word was received that Richie would be performing at a high school auditorium only thirty miles away. Tickets were promptly gotten. I may not have let them out of my sight. It was a night I had been waiting for many years. Our seats were about five rows back, left center. It was perfect.

I couldn't tell you now what was on his play list that night, but I do know how he ended it. Yep. "Just Like a Woman." He played and played and played those strings with such unbridled enthusiasm and joy that by the end of the song we were all on our feet. He jumped up, too, and finished it standing, with broken strings flying every which way. He wore a long white robe and if Jesus had been a guitar player I think that's what he would have looked like, maybe sounded like, too. It was an ecstatic moment and the best altar call ever.

A few months after that, I was hanging out with friends and talking to a guy named Lars about that night. He'd been there, too. Afterwards, he went around to the back of the auditorium to see if he could see him, you know, the same stuff I used to do, until I didn't. Maybe you did that once or twice yourself? Hmmmm? Well, not only did he get to meet him, but there was a pickup game of basketball on the outside courts and there was Richie in his long white robe, playing basketball. Lars was asked to join and so he did, naturally. He played basketball with Richie Havens.

Here's Richie with, "Tupelo Honey," and, "Just Like a Woman," from 1974 ( a beautiful segue), followed by the Bobfest version. In the comments below one of the videos a viewer wrote, "He winds up from beneath his feet and casts his soul across the universe." Exactly so. I include both only because I can't get enough of Richie Havens, and they're both great. I couldn't decide, so I'm leaving it up to you.

I have to add: just as I decided on the title of this post, taken from the song, it started to rain for the first time in a long while.


Posted by Teresa Evangeline at 2:08 PM