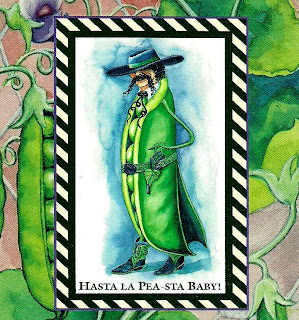 Amy and I met shortly after I arrived in Santa Fe in the late fall of 2001. When we were introduced, I wasn't so sure I was going to like her. The first thing out of her mouth was about how my "accent" sounded like something right out of the movie, "Fargo." I silently took umbrage. I do not sound like a character from "Fargo," but I am from Minn-e-so-ta. Turns out, she was not the only person who would pick up on that. In time, I learned to ameliorate it through a greater awareness - cutting way back on my, "Yeah, you betcha's," - and we became fast friends, though she was sort of a city girl.

Born and bred on the east coast, in a family that had become wealthy but broken, she was still struggling with family issues when we met. They seemed to follow her around, nipping at her heels. We had many conversations about life with her father, otherwise known to her as "The Great Santini." I was invited to lunch with them once, when he was visiting Amy, and I saw things differently. But, perception is everything, I didn't grow up in their house, and Amy's perception seemed locked in around that issue. I only mention this because, well, it all seems tied to Amy's life, and, perhaps, even her passing.

Amy was a sculptress who created beautiful pieces using the theme of pea pods, naming her small company "Peas on Earth." She had an article in "Victoria," a magazine I had liked very much at one time, years before I met her, and she'd built a nice following to her work, often creating commissioned work such as a canopy bed for someone's daughter, or a garden bench for a mutual friend who lived just off Canyon Road. She created a line of jewelry and, to make ends meet, home decor items such as wall sconces, candle holders, and wine decanters. Just prior to her passing, a piece of her sculpture was added to the International Peace Garden on the border between the U.S. and Canada. 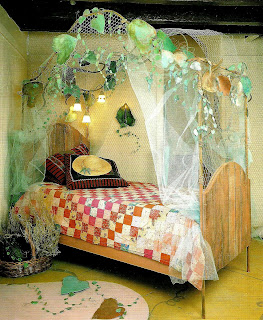 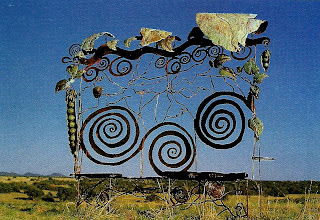 Before she arrived in New Mexico, she'd spent most of her adult life in New York City. She got her start by creating jewelry for herself and then for friends who inquired about it. One day, while on an elevator, someone from Cartier spotted her jewelry and she was invited aboard as an apprentice designer. I'll let Amy tell you a little more about that in her own words further on in this story.

At the time, she lived in the same neighborhood as John Gotti, a "family" man you might have heard of, and she mentioned that many times his guys would help her carry her groceries, always very polite and helpful. It was just one of the NYC stories she shared with me and I was all ears. She had some great stories.

We both liked to try a variety of cuisine and Santa Fe has no shortage of that. One day it would be Greek, another day Thai, and yet another day Himalayan or Vietnamese. It was a cornucopia. Because of her, I had my first cup of Turkish coffee. The best cup of coffee I have ever had. It comes in a very small cup and you only drink about 2/3 of it so as to avoid the grounds at the bottom. No sweetener, no cream, and it was absolutely delicious.

She possessed a joie de vivre that constantly amazed me, her sense of style always shining through. She could throw something on and be ready to go in no time at all. And she did it with no fear. Amy didn't keep the most organized house, but she did keep an interesting one. One day, we were getting ready to go someplace, she hadn't selected anything from her wardrobe yet and laundry day was way overdue, so she pulled a colorful vest from the pile, asked, "What do you think?" Then she put it on - backwards. It was perfect.

Her hair had turned silver at a young age, and so she had fun with it, often sporting a slash of pink among the silver. It was a combo that seemed to go with her style and her passion for life. One evening, as we sat at the Saigon Cafe, she handed me a small box. Inside was a brooch and a pair of earrings she had created for me: pea pods, with tendrils curling around them in an elegant earthiness, and an insect, sort of a pea pod praying mantis. I was thrilled and loved wearing them. The purse I'm displaying them on is one from my collection. I bought it at the Tesuque Flea Market, where we loved to go and just look around on the weekends. They once had matching slippers, which have since worn out. 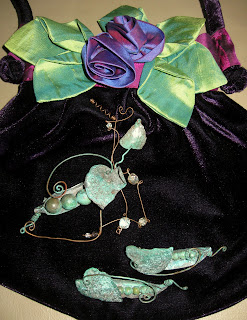 She would haul stuff home from second hand stores or the Habitat for Humanity store and rework it into a great new piece of home decor, a hanging lamp or something. One day, we thought we'd go up to the Santa Rosa Reservoir in the hills above Chimayo. We both had a hankering to be near some water. We decided to take the road through Nambe. As we made the turn, we saw a white cabinet in the middle of the road. We stopped, she jumped out, hauled it in the car, examined it briefly, and then announced it was exactly what she had been looking for, for a project she was working on. See?  I'm not the only one.

She was one of those friends with whom you could share anything and she would listen without judgement or an inordinate amount of questions. We were both adult women and had lived our lives without a whole lot of hesitation. She was working on a screenplay loosely based on her life, and she talked of how we'd enter the world of film-making together, setting the industry on its ears with what we had to say. A lot of talk, but it sure was fun talk.

We talked about our times of loneliness and how we dealt with it, the little ways we'd found to combat it, when it wanted to tap at the edges of our consciousness. She had the practice of leaving the radio on at home, to a much-loved oldies station, and whenever she returned from being out and about, there it was, voices and that familiar, almost always happy music.

We shared a friendship just shy of three years, but we packed a lot into that time. Cancer seemed to come and go and just when we thought she had it licked, it reared its ugly head again. About the time I thought she was finally past it, I found out she was just keeping quiet about it. Maybe she wanted to protect me from the worst of it, or she just wanted to proceed on her own. One day, in the fall of 2005, her mother came to visit, told her it was time for her to come home to Saratoga Springs, in New York, and within a few days Amy had given away most of her things, made arrangements to move back east, and that's the last time I saw her.

We stayed in touch through letters and phone calls for a few months. She sent photographs of a lake in upstate New York she thought I'd like, with islands for camping, and encouraged me to visit as soon as possible. That was around Christmas time in 2005. A few weeks went by and I hadn't heard from her, so I called her number only to find it was no longer in service. I found her mother's number and called. Amy was already gone. She had passed in late January and her mother, not knowing me at all, had not contacted me. It was probably almost impossible news to deliver and I do understand.

After hearing the news, I found myself driving over to Second Street, where she had lived, walked down to her loft, thought about the day before she'd left, how I had walked away from her place with the sun shining so bright and warm, and yet knowing, on some very deep level, I would never see her again. That day, I barely held it together on my way to the car. When I returned to her place, after hearing of her passing, I sat in my car again and wept. Bitterly. It seemed unfair and it seemed unnecessary, and I had to take some time to adjust, learn to accept it.

It's taken me some time, but I think I have come to accept it, as much as one can accept the loss of a friend who brought so much to one's life. It's why I can write about her today. I have come to appreciate more and more the struggle she faced, how she fought to maintain a sense of normalcy, her deep love of life, and her ability to live each moment fully for whatever time remained. Her courage encourages me still. I'm even thinking of replacing those worn out velvet slippers with a brand new pair.


And now, I'd better pull myself together, because Buddy isn't used to seeing me cry and it's time to get on with this day. Maybe I'll wear my pea pod earrings and brooch around the house for a while and think of Amy. I can see her now: she's riding in a convertible through the streets of Paris, a man who loves her is by her side, just like all those years ago. She's happy, the sun is shining, and the wind is blowing through her beautiful pink and silver hair.


Here, in Amy's own words, from her brochure (please click to enlarge): 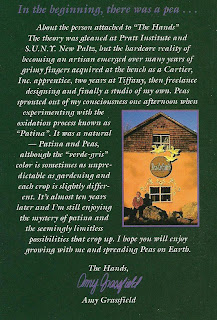 Postscript: As I was going through the memorabilia and brochures for this piece on Amy, I decided to look again at that last card she sent me, about five weeks before her passing. I hadn't looked at it for years, nor could I remember anything about it. Imagine my surprise when this is what I found. 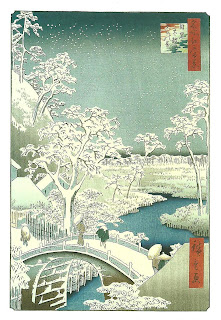 Yes, I believe she is telling me something. For those who might not remember this post, from March of last year, "Everything Lives Inside Us."

Posted by Teresa Evangeline at 8:34 AM