In My Mother's Voice 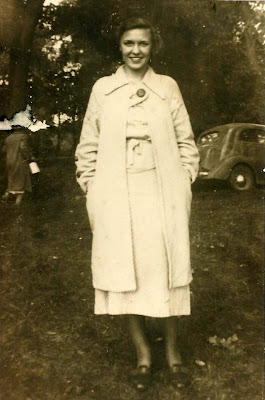 Her voice was deep and rich, full of peace and promise, and that's not hyperbole or prejudice. She had an amazing voice. Whether speaking or singing, the timbre reached down into the depths of your soul, uprooted all that was unnecessary, and uplifted all that was. So, why I felt the need to speak for her, ever, is a mystery. I have some ideas, but those are metaphysical in nature and for another post, perhaps.

Mom kept the family peace, or tried to, despite the harangues that were sometimes leveled against her and rarely showed her hurt. I would quite often, out of a show of solidarity and great love, do that for her. As she remained silent I would jump up from my chair, usually at the dinner table, and raise my voice on her behalf, speaking (rather loudly) about my anger over the family's inability to accept whatever thought she had offered. Diving headfirst into what I saw in that moment as her infinite goodness, I would buoy her up whether she asked for it or not, and she never asked for it. She didn't need my help but that did not deter me. I pressed on in her defense until my own anger was spent.

If the subject was mushrooms and she had pronounced those growing in the yard as edible, even as other family members questioned her ability to know such things, well, they were going to be pronounced edible if I had anything to say about it. And say it I did, vociferously, all the while reminding them, in layman's terms, of her innate intelligence. But, it wasn't about her intelligence or her mushroom savvy. There were higher issues involved here and when I was young it was all about justice and the disenfranchised having their say. My mother did not fit that category by any specifications other than as a woman married to a man who sometimes resented (my interpretation) her brilliance.

If the subject was her weight - something she struggled with her entire life until disease took its toll on her body - and she was being castigated by my father even as she raised a fork to her mouth with another bite of blueberry pie, a delicious pie of her own making, I would stand up in her defense and in support not only of her culinary abilities, which were myriad, but also her right to have as many bites as she wanted. She could, in fact, "eat the whole damn pie if she want[ed]."

My tirades usually ended with me storming out of the room, taking refuge in my bedroom in the earlier days, or in the basement, and occasionally a certain secluded rock along the lake shore near our home. Eventually, another family member would come looking for me, reassure me I was right, although my timing might have been off, and then quietly lead this black sheep back to the fold.

In later years, when her voice had been eroded by disease and she could seldom muster a response, her voice would occasionally still come through - low, rough and whispered. Near the end, when I called her on the phone, desperate to hear her voice again, and told her I was thinking of going back to a relationship I'd left a few years before, she said, clearly and distinctly, "You can't go back."  It was not advice, it was a philosophical stance she was taking and it was the last time I recall hearing her voice in all its beauty. The strength it took for her to say that, and for me to hear it, serves as a reminder that life is always about moving forward. Moving forward and letting go, including every perceived act of injustice or unkindness. Just let it all go. It's what my mother would want.

In the end
these things matter most:
How well did you love?
How fully did you live?
How deeply did you let go?

Posted by Teresa Evangeline at 7:36 AM