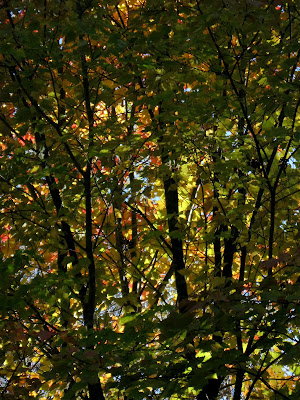 This poem doesn't seem to want to recede into my personal archives, but keeps reappearing. I like the poem, but am not certain why. Perhaps I like the idea of saying something inadmissible (actually, there's no perhaps about it), and I think kisses make pretty good oaths. Other than that, I'm not sure... But now, I feel I should post it. I don't know why. Perhaps I'll find out....

"The Rules of Evidence"

What you want to say most
is inadmissible.
Say it anyway.
Say it again.
What they tell you is irrelevant
can't be denied and will
eventually be heard.
Every question
is a leading question.
Ask it anyway, then expect
what you won't get.
There is no such thing
as the original
so you'll have to make do
with a reasonable facsimile.

The history of the world
is hearsay. Hear it.
The whole truth
is unspeakable
and nothing but the truth
is a lie.
I swear this.
My oath is a kiss.
I swear
by everything
incredible.

I took the photograph yesterday just because I liked the way the light was coming through the trees. It sure is pretty outside.

Posted by Teresa Evangeline at 8:01 PM