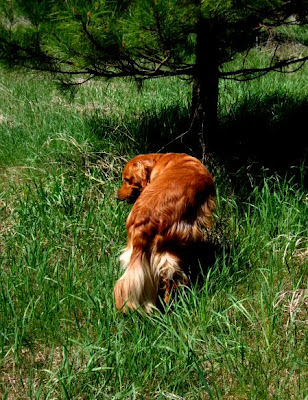 There's a breeze in the meadow, towels are drying on the line, and apples are falling from the trees. Not many days are finer than this one. Every once in a while the wind chimes sing out, but not enough to drive me batty. I like my wind chimes to be soft and occasional. I swore off chimes while living in Santa Fe as they were neither. No matter where I placed them the wind would run around that little adobe house and find them. But, here they seem to know there's only so much noise I can handle and they never cross that line. Perhaps they understand that now it's all about the birdsong.

My fall work list has been growing and is sitting there, staring at me, but today I'm ignoring it. Plenty of time to prune the rose bushes and hydrangea tree, move perennials to other beds, saw the lower, dead limbs off a few trees, and then take a look at the rest of my list. I almost wrote, 'the rest of my life.'  Sometimes, that's how it feels. But, I don't make plans. Life will make them for me and they'll be far better than anything I could have imagined. It's always been that way. No reason to believe it will change now.

Buddy and I just came back from a walk in the meadow where he managed to find a fairly fresh pile of bear poop. He's rolled in it about three times this year. As I run toward him yelling, "No, Buddy!" he rolls and rolls in happiness. Today, the damage was minimal and so I took a soft swatch of pine needles that was lying next to him and cleaned up the worst of it, finishing with a handful or two of long, still-green grass. He seemed so proud of himself, like a warrior who's one with the bears, their smell still lingering on the almost lion-like mane around his neck. I can't tell you how much I love him. There are no words.

And now, a short nap on the couch next to the open windows, where I'll fall asleep listening to the wind rustling the leaves on the trees. This is too fine a day to waste on lists. Buddy's lying on the floor next to me and we have some dreaming to do. We'll be running with the bears, my little woodland warrior and me.

Perhaps some of you will remember this poem I posted last year by Leslie Marmon Silko. It's one of my favorites: http://teresaevangeline.blogspot.com/2011/03/alone-in-canyon-of-stillness.html

P.S. JB, my friend in Moab, Utah, called after reading this. It reminded him of a Greg Brown song we've both always liked. So, I decided to add it.


Posted by Teresa Evangeline at 4:14 PM