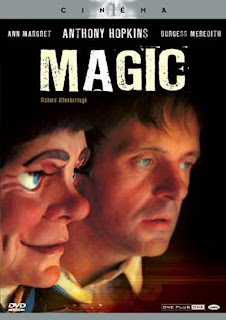 While I seem to be on the subject of clowns and dummies, I thought I might as well go ahead and tell you my "Magic" story, which was alluded to in the previous comments. It brought to mind an incident many years ago that has since raised a question or two, questions I've used to look at the nature of reality, which happens to be one of my favorite topics.

It's the winter of 1979, and I'm going to see the movie, "Magic," which is based on a book by William Goldman. Goldman is one of my favorite writers. He also happens to be a favorite for my friend and movie-going companion (same friend that's in my "Deja Vu All Over Again"  post of a couple of weeks ago).  We'd both read the book and wanted to see the movie. A young actor named Anthony Hopkins, someone we'd heard good things about, was starring in it. Ann-Margaret was playing the female lead, and although I didn't think she was a great actress, it seemed she'd fit the part quite well. We were going to see it at the Cooper in south Minneapolis, one of the new surround sound theaters just gaining momentum in the movie-going biz. 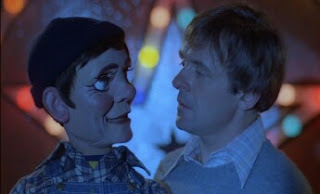 If you've never read it or seen the movie, it's about a ventriloquist and his doll, aka dummy, who have, shall we say, an unusual relationship. It builds accordingly, all leading to the  moment when I actually, for the first and last time ever, hid my face momentarily in my companion's shoulder. It was actually scaring the heck out of me and I couldn't watch. Sort of like the kid with her hand over her face peeking through her fingers. For those in the know, it's the scene where the dummy is hiding around the corner in the hallway and you realize in that very moment that things are definitely not what they seem and they're about to get ugly. The movie is not typical horror movie stuff; it's intelligent and has a real story to it, but that doesn't stop it from being scary. The really weird part of the evening was yet to come. 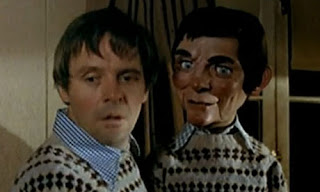 We leave the movie, glad we saw it , thought it was good, and that Hopkins guy is one fine actor. We decide to head over to my sister's restaurant, Hoggetti's, in north Minneapolis, for a bite to eat and a visit. When we arrive it's quiet, too late for the dinner crowd and too early for the bar rush. We sit down in a booth and start visiting. Without paying much attention, someone comes in and, in an almost empty restaurant with plenty of seating, sits down across from us. The guy starts talking to us and it's then I realize he's a ventriloquist and he's laid his dummy down on the seat in his booth.

I try to remain calm, but the weird factor is building along with the heebie-jeebies, and I know I'm not alone in this. My companion, who was not entirely unfazed by the movie we'd just seen, knew I was getting ready to bolt. I don't recall now if the guy started talking through his dummy, but I do know we fled with barely time for niceties. I don't recall the discussion that must have surely followed in the car ride home, but we were both left more than a little off-center by it.

Now, I was young and foolish, so the strangeness, although certainly not lost on me, also was not seen from the perspective that I have since gained on this experience. As a matter of fact, I've noticed more and more that the universe seems to be mirroring my thoughts, and often, now that I'm paying closer attention. I see it on bumper stickers, billboards, the computer, in simple incidents that happen in my everyday life. This was the first time I recall it happening so blatantly.

I don't see these as mere coincidences anymore. I see them as something more. What exactly, I'm not certain, but I do know it happens and I'm kind of enjoying it now. It's fun to look at and occasionally ponder. I don't know if I need answers, I doubt it's possible from this human experience, but I am going to continue to acknowledge them. If nothing else, it seems to be affirmation that I'm on a good path and life will keep unfolding before me in the wake of that goodness. Sort of like the number 222, which is another story, for another time.


If there's anything half so much fun as being alive, I'd like to know what it is." ~ Frederick Buechner


Posted by Teresa Evangeline at 10:00 AM