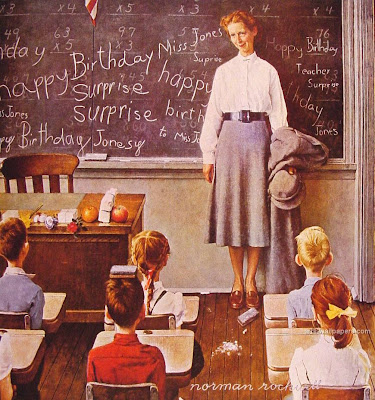 You're probably familiar with slam poetry.  These poets deliver their poems with a bit more oomph, shall we say. My friend, Diane, sent me a link to one of Taylor Mali's poems on youtube and I really liked it. He's a former teacher whose poetry has led him down a new path. Advocating for teachers is one of the things on that path. I went exploring a bit and found another one that jumped out at me. It's been around for several years, but it's new to me. Perhaps it will be for you, too. If not, forgive me for being slightly behind the curve.

Things have changed a great deal since Norman Rockwell painted, "Teacher's Birthday."  But, about this time every year, teachers still return to school for another attempt at teaching young people how to spell and think, among other things. So, this is for teachers everywhere, both former and present, and for anyone else who is considering what to do with the rest of their lives.

First, a link to the one Diane sent. It's called, "Totally Like Whatever, You Know?"  http://www.youtube.com/watch?v=OEBZkWkkdZA

And,  "What Teachers Make."  There are several versions of Mali performing this, but I chose this one because I like his delivery. It jumps right in, so in case you're wondering if you missed anything when it starts, you didn't. And even if you're not a teacher, I think you'll appreciate them both.


Posted by Teresa Evangeline at 9:32 AM