Ghost on the Canvas 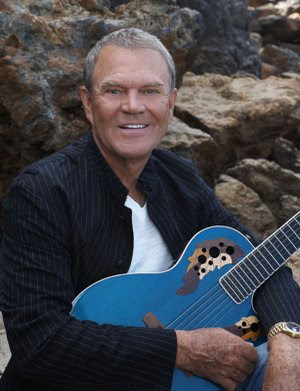 Last night, I watched a video of Glen Campbell and his wife of almost thirty years, Kim Woolen, as they talked about his diagnosis of Alzheimer's disease. Apparently, the symptoms had been coming on for awhile. Glen said he didn't feel any different, didn't notice anything, but it was obvious his wife had, and they were dealing with it. Watching this made me sad, but because Glen himself seemed unfazed, for the most part, I felt a deep sense of joy, also. This man, whose music I've loved for over forty years (don't you just love that blue guitar?), has a new album and a new tour, and, along with it, there's a renewed interest in and understanding of what he's brought to our world.

His catalog is filled to overflowing with great songs, timeless classics. He was blessed with some of the greatest songwriters of our time, John Hartford and Jimmy Webb, to name two.  I name John, especially, because he wrote one of my favorite Glen songs, Gentle on my Mind. I never get tired of hearing it. Other favorites include By the Time I Get to Phoenix, Galveston, Try a Little Kindness (what a great bit of musical advice that is), The Hand that Rocks the Cradle, and, of course, Wichita Lineman. 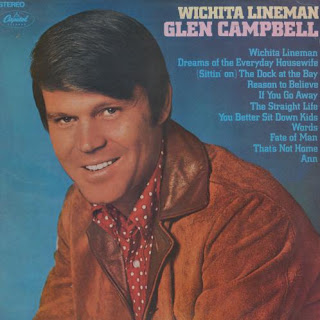 This man came on the scene in the 1960's, stayed around quite awhile, got himself into a bit of trouble in the relationship category, fueled by alcohol and other drugs, and then met his current wife, Kim, one of those people who sometimes makes all the difference. He spent many years performing in Branson, Missouri, the place where country singers go to bide their time and play to an appreciative audience until their time comes around again. I wish his time had come around again under different circumstances, but come around it has and I'm glad for that.

I'd love for you to listen to Gentle on my Mind. It has the perfect melody to match what I feel are some great lyrics. I just love this song:  http://youtu.be/2A7iuQF_tAc

What I was amazed at, in watching the video of his ABC interview, is that this man can still really sing. No studio alterations here. I heard very little difference from then until now. And that's not always the case. If you wish to watch it, you'll find it online, but interviewers, almost without fail, ask stupid questions and rather than give her anymore time, well, you're on your own for that one. I mean, who needs to hear about Elvis when you're talking to this good man right in front of you?

I've purposely chosen videos that are just about the song, nothing to watch here folks. As a matter of fact, I prefer my Glen songs as I'm working in the kitchen. They belong in the everyday of life, because that's what they're all about.

Hell's bells, as long as you're here, you might as well  listen to Wichita Lineman, just to be reminded:

All three of these songs take up not much more than ten minutes of our lives, but they span decades and will stay with me forever. They're a very big part of the soundtrack of my life. 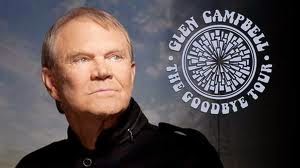 Glen's new one, Ghost on the Canvas, has some lines I just love: wheat fields and crows. Anybody coming to mind?  Here it is. I hope his tour lasts a very long time.

Posted by Teresa Evangeline at 10:32 AM