Sleeping on the Ground and the Persistence of Memory 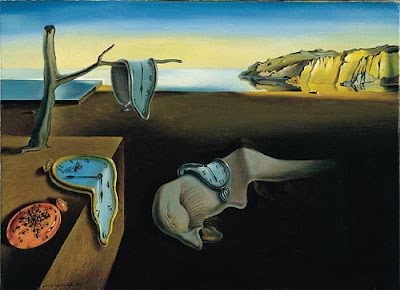 What do Salvador Dali and Mary Oliver have in common?  Very little, I would suppose, but one never knows. I'm going to forge ahead anyway, because they both popped into my noggin about the same time. We'll see where this thing takes us.

It actually started with an allusion to Pablo Picasso I'd read yesterday and I wasn't sure exactly when these two gentleman's lives might have converged so I looked up their dates. As I suspected, Pablo arrived on the scene shortly before Dali. One set the bar as the King of Quirky and the next one raised it. None of that has much to do with my subject which, believe it or not, is camping, sleeping on the ground to be a bit more specific. Dali's painting, "The Persistence of Memory," got me thinking about memory and in popped the homemade tents my sister and I made in the yard a whole lot of summers ago.

These tents were made of blankets, as many as we could abscond with from the house. We would string some clothesline between two trees, tie it off and throw the blankets over it using clothespins to secure them and rocks to hold down the corners. It was quite a makeshift camp we had. The payoff was sleeping on the ground, feeling the earth beneath us, and being able to open the end blanket to look up at the stars overhead any time we felt like it. Which was fairly often.

On more than one summer night, a breeze would blow, the night would grow cold, and we'd find ourselves trudging back to the house in the middle of the night. On the nights this didn't happen, we would almost always find ourselves sleeping under the night sky at some point, with the blankets fallen down around us. We'd scrunch down inside them a bit more and wait it out 'til morning. Some mornings we'd wake up only to discover it had happened unbeknownst to us, we'd slept right through it and the morning sun was shining on our faces.

I've done a lot more camping in my life, with a real tent. Some of it has been up on the north shore of Lake Superior with its spectacular scenery, some of it at state parks elsewhere in Minnesota, a whole lot of it in southern Utah. There's a campground on the banks of the San Juan River, a few miles outside of Bluff, that has some nice sites and Deer Flat Road up on Cedar Mesa has a particularly nice spot to set up a base camp from which to explore the nearby canyons. Watching a full moon come up over the rocks and pinons had such a surreal feeling one night I thought I'd stepped out of a dream and into a painting, Rene Magritte this time, but that's all the further I'll take that as this is already occupied by some pretty surreal fellows. Well, maybe one image won't hurt. 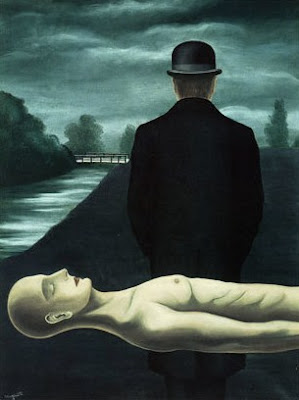 There's something about sleeping on the ground, or pretty close to it, that has an almost primordial feeling to it. Close my eyes up there on the mesa and all sorts of lives float through. It's not at all difficult to imagine being inside an alcove, tucked into a canyon wall, my children softly sleeping next to me, or lying up on a rock ledge behind walls made of mud and juniper with a dog at my feet. It feels good. It feels natural.

These days I sleep on a queen size plush top mattress and that feels pretty good, too, but it's the nights inside those homemade tents made of blankets and clothespins that still call out to me across the years and make me wish for just one more night, to sleep under the stars with the full moon on my face.

A while back, I'd written down in a notebook a poem by Ms. Oliver I thought I'd like to share at some point. I guess that point is now.


"Sleeping in the Forest"

I thought the earth remembered me,
she took me back so tenderly,
arranging her dark skirts, her pockets
full of lichens and seeds.
I slept as never before, a stone on the river bed,
nothing between me and the white fire of the stars
but my thoughts, and they floated light as moths
among the branches of the perfect trees.
All night I heard the small kingdoms
breathing around me, the insects
and the birds who do their work in the darkness.
All night I rose and fell, as if in water,
grappling with a luminous doom. By morning
I had vanished at least a dozen times
into something better. 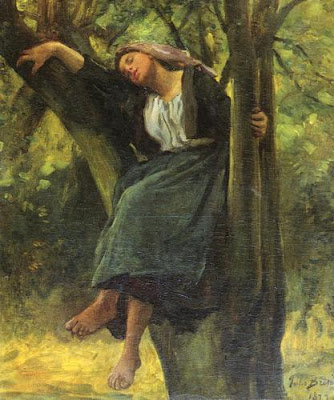