Every Purse Tells a Story 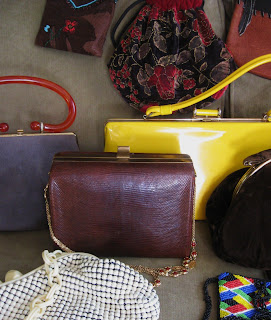 This is my story of purses (I can see those eyes glazing over from here), but I encourage you to stick around. It may get interesting. Okay, it may get semi-interesting. Well, Linda, at http://www.blueskiessunnydays.blogspot.com wants to read about them, so here we go, Linda, and anyone else who may or may not wish to identify themselves.

When I was about five years old, I got my first purse. It was clear plastic, with pink flowers and a bit of white bead work. For a little girl who spent a good deal of her time in the woods, you wouldn't think a purse would be a want, but I had a habit of quietly getting into any purse left lying around, friends of my sister, Judy, being my chief victims. More than once I was caught with my hand in the  "cookie jar." I wasn't larcenous, I just saw them as portable treasure chests, where anything was possible, and I wanted to know what they were carrying around in there.

On one particularly dark night, I left that purse sitting on a table in a cafe I had gone to with my parents. After playing "Sugartime" on the jukebox enough times to drive my parents and anyone else within earshot stark raving mad, we walked out, into the dark and to the car, not realizing until we were long past the turnaround time that I had left it behind. Despite my parents promise that they would see what they could do to get it back for me, I held out little hope for ever seeing it again. The town we'd been in was about sixty miles away and that was a distance in 1958. I can't imagine what was in it, little to nothing; every nickel I might have had went into that jukebox, along with my dreams of being one of The Lennon Sisters. I can see my small self sitting in the back seat still, sadder than I'd ever been. That little purse never found its way back to me. 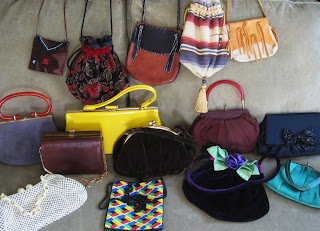 They say everybody needs a hobby, I guess this one is mine. See that brown and black one in the upper middle?  Buffalo hide. Bayfront Blues Festival, Duluth, MN., sometime in the mid '90's. Ditto for the deerskin in the far upper right. Same festival, different year. I used to wear it tied around my waist, aging hippie that I was. Am. The little beaded brown suede pouch on the far left was bought from a Native American woman near Page, AZ., while on my way to Lee's Ferry, a place with some historical interest, if not significance. It's sort of an amulet bag. 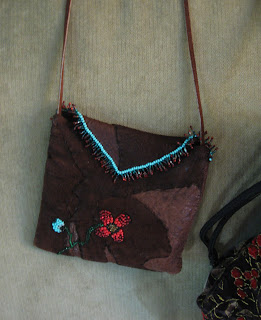 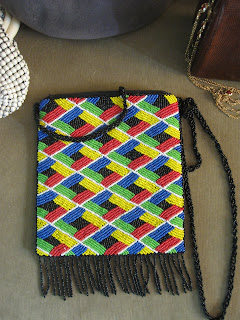 The other beaded one was bought at a consignment shop when I first arrived in Santa Fe in the fall of 2001. Got it for only $10. I've never understood how it could go for so little. I had a long blue coat that it seemed to go with perfectly. 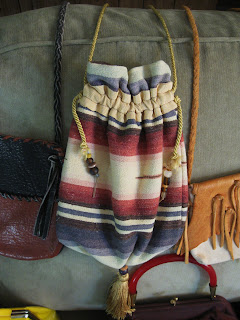 The little pouch with a tassel, made from an old serape, was bought from a woman who had a store next to the art gallery where I worked on Canyon Road. She made some very cool jackets, also out of serapes, and was a painter as well. She lived in the back of her gallery/store, an old adobe known as The Bodega. When things were quiet she'd sit on a bench just outside the door, wearing her own creations, a quintessential Santa Fean. Her name was Teal. She was well-loved and respected among the locals. I wish I'd gotten to know her better. She kept her illness very quiet and no one really knew she was struggling until she no longer walked up to El Farol in the evening to join her friends on the patio. She was gone shortly thereafter. Every time I use it, I think of her.

Then, there's this brown velvet one. I bought it at a Salvation Army store. It has a peach silk lining and leopard print velvet gloves inside. It always makes me feel good. 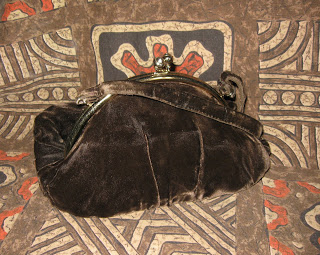 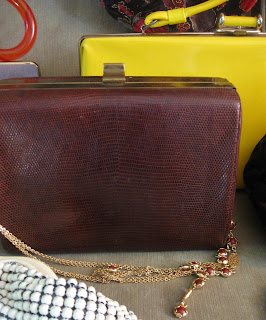 My still burgeoning collection began with that little crocodile bag. It could be alligator, but I think it's crocodile. I got it at an auction for just a few bucks. My sister, Chris, knew I coveted it, but it was in a box with some other things and it wasn't coming up real soon. We both wanted to expedite things, so she simply took it out of the box, told the auctioneer's assistant I wanted to bid on it, now would be good, and so he put it up next. I was the sole bidder and got it for just a few bucks. We hightailed it out of there, with me happy as can be on a Saturday morning in June. That was back in 1980, I believe. I used it a lot, so the handle wore out and I, in a moment of pure purse genius, replaced it with a necklace my grandmother had given me back in the late '60's. I'd never worn it, it wasn't my thing. Maybe it was waiting to become a handle for my purse twenty and some odd years later.

Which takes us to the yellow one. Bought in a vintage shop in St. Paul, it remains one of my favorites. It's been the most fun. And there's a bonus. 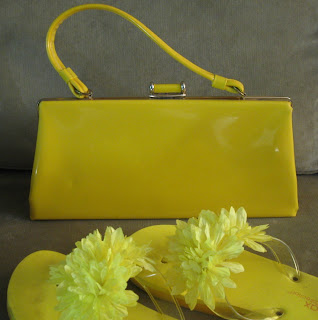 
Well, that's it for now. Thus ends the story of my purses. I may be back for a part two. There are more, as you can see from the picture, but their stories can wait for another day. See that black one with the beaded bow?  Viva Las Vegas, baby. Yeeeah. Now you want to hear more, don't you?  Maybe next time. 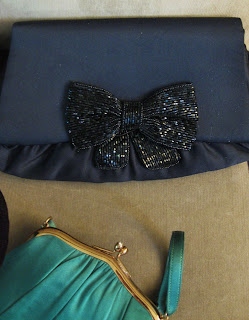