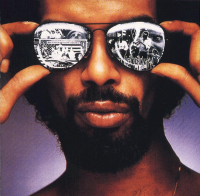 When Gil Scott-Heron passed on May 27th, I found myself in memory back on Guadalupe St. in Santa Fe: it's the summer of 2004, the elections are on everyone's minds and I'm planning to be down on the plaza that afternoon to hear Bill Clinton talk up John Kerry for president. Later that same summer, I'd see Kerry and shake his hand at the Borders there. I wasn't as much enamored of his candidacy - I saw it only as infinitely better than the alternative - as I was still grateful for his appearances way back in '71 as part of the Winter Soldiers who were working on an end to the Viet Nam War fiasco. For that, I would still shake his hand, no matter the controversy surrounding it.

On this particular morning in 2004, for the first time in many years, I hear Gil's "The Revolution Will Not Be Televised,"  on the radio. It's one of those songs that instantly takes me back to a particular time and place. In this case, college, early '70's. Whatever his problems were over the years - and they seem to be centered on alcohol and drugs, as with many fine artists struggling to be heard in a world that appears to be in constant turmoil - there was something eminently likable about him. It also appears that towards the end of his life (he was only 62 when he passed), he had gained some measure of peace and understanding around the whole living thing. At least that's what I brought away from this video, his last.

It's titled, "I'm New Here." I like the message and I like that he's delivering it. The background video of him carrying flowers - gladiolas I believe - is a tribute in itself to where he was when he left us.


Posted by Teresa Evangeline at 12:15 PM