4-H: From Radishes to Rosettes

When I was a kid, 4-H was a pretty big deal. All the kids I knew belonged to it, including my siblings. Most of us were farm kids, to one degree or another. Some families were serious farmers, some had other ways to make a living, but did some farming because it put food on the table. We belonged to that second category.

When I was old enough to join, I had some mixed feelings. I knew I was supposed to look forward to it, but much like baptism, I wasn't sure it was for me. I liked the idea of it, the actual  practice of it not as much. It was a club and clubs had rules and regulations, along with what felt like, to me, too many expectations.

For starters, most of the girls were expected to do girl things: baking and sewing for the younger group. I wasn't violently opposed to these things, but I was not particularly enamored of them, either. Produce from your garden was a possibility, too, but arranging potatoes on a plate to be judged at the county fair didn't sound too appealing. So, I made less-than-delicious oatmeal cookies, sewed dresses that were unseemly (the puns are semi-intentional), and even participated in a fashion show where everyone wore the dresses they'd made. I don't think I was such a bad seamstress as the choices for material were not appropriate for small town country girls. Blue and white geometric patterns didn't go over well among the local 4-H elite. White ribbons were not uncommon and humiliation came easy. Yet, I forged ahead, because it was expected.

My sister, Jane, a couple years older, had a similar penchant for less-than-acceptable clothing. One year, she made yellow, dotted- Swiss bellbottoms with white lace sewn around the bottoms, right up to the knee, with matching sleeveless cropped top. By cropped top, I mean her belly was exposed.  We were not supposed to expose our bellies, but we did. As often as possible. It was the sixties and we were going to participate, come hell or high water. I can still see the look on the Agriculture Extension Agents's face when he came to our meeting and saw her project. I imagine his stifled smile arrived with the realization that, "the times they are a changin'."

One year, probably the same year, a boy named Allen, who I had heard through the grapevine had a crush on me (the grapevine being my cousin, Karla), decided to join our little band of potato growers. Unfortunately for me, he showed up for the first time on the same evening that I was expected to give a little talk about something or other, the project we were currently working on, or something else of interest and apropos for 4-Hers. I had to stand up in front of the group and deliver. Right now, in this very moment, what I spoke on just came back to me. I had, with the help of my mother, decided to give a talk/demonstration on how to make rosettes from radishes. I kid you not.

Handling a knife with Allen in the audience, audience being about a dozen kids or so, was not what I had planned. It became a blur, but I got through it.

And never went back again.

I never got to do photography, floral arranging, or pinning butterflies onto cloth under glass. And that was okay with me. My parents, however, may have occasionally wished I hadn't cut my 4-H years short. Allen did, eventually, become the second boy I ever kissed. We were supposed to be at a youth group meeting at our church, learning to be better youth. I discovered I liked kissing better.

Which brings me to our pledge. It always hung above our booth at the county fair. I'm pretty certain I broke it more than once over the years. 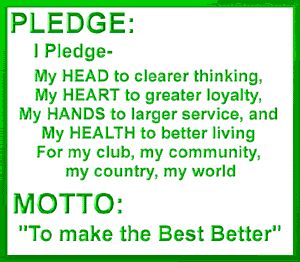 Posted by Teresa Evangeline at 12:51 PM