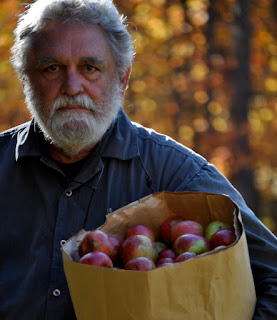 This poem, "The Bear's Money," by Louis Jenkins, just knocks my socks off. Jenkins is a prose poet living in Duluth, Minnesota and I'm a big fan. Two of his poems have served as Mark Rylance's acceptance speeches for Tony Awards he's won as best actor. I've written before about my fondness for these men. They are currently collaborating on a play based on Mr. Jenkins poems, which have more than a touch of Minnesota in them. They're about the real world, with a smidgen or two of the mystical thrown in for good measure. Their play, "Nice Fish," will be opening at the Guthrie Theater in Minneapolis in April of next year. I think tickets are in order, or perhaps I should say, will soon be on order.

Every fall before he goes to sleep a bear will put away
five or six hundred dollars. Money he got from garbage
cans, mostly. People throw away thousands of dollars
every day, and around here a lot of it goes to bears.
But what good is money to a bear? I mean, how many
places are there that a bear can spend it? It's a good
idea to first locate the bear's den, in fall after the leaves
are down. Back on one of the old logging roads you'll
find a tall pine or spruce covered with scratch marks,
the bear runes, which translate to something like
"Keep out. That means you!" You can rest assured that
the bear and his money are nearby, in a cave or in a space
dug out under some big tree roots. When you return in winter,
a long hike on snowshoes, the bear will be sound asleep....
In a month or two he'll wake, groggy, out of sorts, ready
to bite something, ready to rip something to shreds ... but
by then you'll be long gone, back in town, spending like a
drunken sailor.

Some info. on their friendship and collaboration:

That wonderful photo at the top is the poet, and one more picture of Mr. Rylance can't hurt.... 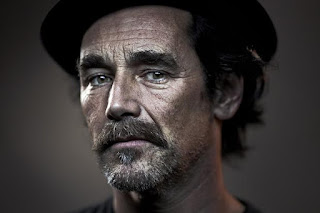 Posted by Teresa Evangeline at 4:24 PM