The Last Child Into the Ship 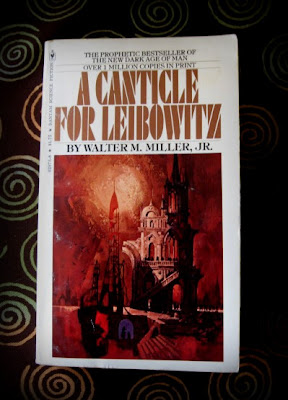 One of my favorite books throughout the vast number of years it seems I've been reading now, continues to be A Canticle for Leibowitz, by Walter M. Miller, Jr.  A science fiction classic, I was first introduced to it in a literature course in college taught by my beloved professor, Dr. Milowski. * It was during this course that several writers came into my personal canon. This one stands out among them still. For several years I enjoyed collecting the many different editions, each one having a different cover, if not format.

It's a post-apocalyptic story revolving around a religious order that springs up after nuclear devastation. The world is a barren desert with all knowledge gone. Out of this hellish landscape hope springs from what amounts to a simple grocery list scribbled by the Blessed Saint Leibowitz:

This and other "important documents" have been discovered in a "fallout survival shelter" by one Brother Francis, around whom this story revolves. Brother Francis is a seven year novitiate at the abbey who has become proficient in the imitation of wolf calls, amusing his brethren by calling the pack nearer the abbey after dark. Of course, as history begins to repeat itself, as it's wont to do, all sorts of politically based motives develop around Brother Francis, Saint Leibowitz, the discovery of his papers (which include a blueprint for circuitry design), and the powers that be.

It is, however, the very first paragraph of the book that drew me in, as is usually the case: "Brother Francis Gerard of Utah might never have discovered the blessed documents had it not been for the pilgrim with girded loins who appeared during that young novice's Lenten fast in the desert." And so the story begins....

But, this isn't a book review. What intrigues me about this book and always has, is how the simplest shred of hope becomes the very thing a large number of people create and even develop a story around that may or may not be true. Facts are not what is important, what is important is the shred of hope.  Now, as you might well know, I'm a big believer in hope, but hope is a tricky thing and can cause us to create "truth" rather than be willing to look with clear eyes at what actually is. As a momentum builds we overlook many very blatant facts in order to hang onto that hope. It can be a rather frightening scenario, and so we don't willingly look at it with open eyes. It's easier to look through the fingers we've spread across our face and pick and choose what we want to see, want to believe, and accept that as reality.

However, it's not healthy for us, or for this planet. So, maybe we need to get outside our comfort zones, look around, and see where we really are, and then start creating the life we really want. This is true for us as individuals and it's especially true now, for all of us, collectively.

From the final pages of A Canticle for Leibowitz:

The last monk, upon entering, paused in the lock. He stood in the open hatchway and took off his sandals. "Sic transit mundus," he murmured, looking back at the glow. He slapped the soles of his sandals together, beating the dirt out of them. The glow was engulfing a third of the heavens. He scratched his beard, took one last look at the ocean, then stepped back and closed the hatch."

And for reasons that the book itself reveals, this song, "After the Goldrush," written by Neil Young and performed here by Dolly Parton, Emmylou Harris, and Linda Ronstadt, seems to fit perfectly:

For a good description of this novel: http://www.en.wikipedia.org/wiki/A_Canticle_For_Leibowitz


* Dr. Raymond Milowski, the professor I have referred to here and in a previous post, has recently passed on. His son, Alex, was kind enough to inform me. I'm very sad at his passing, yet so grateful for all that he brought into my young life. When I was so very eager to gobble up everything I could in the way of good literature, he most kindly obliged. I will write about him again in a future post after the memorial service.

Posted by Teresa Evangeline at 10:31 AM