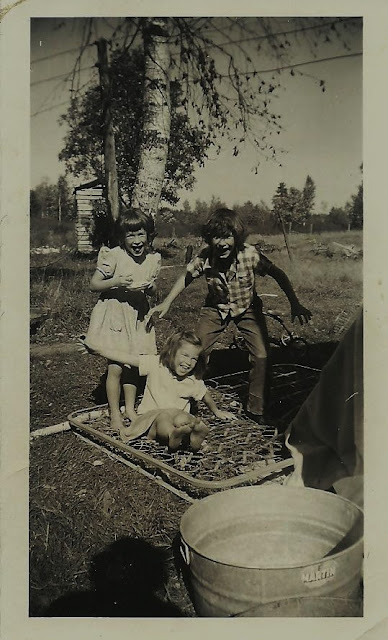 When I was very young, I attended a church that suddenly began to have a call to the altar every single Sunday. For the unenlightened, a call to the altar is where you repent of your sins, accept Jesus as your personal savior and become "born again." Even then, it left me cold and disturbed, something I've posted about before. I couldn't understand the need for it. I was somewhere around six years old when it started. How bad could I have been?

Perhaps it was the time I spilled nail polish remover all over my sister's 45 records, erasing any hint of artist or title. Hey, accidents happen. Or, it could have been the summer I didn't want to take the time to walk to the outhouse and so went behind the house, and when confronted with the evidence I lied. I suppose I could have been a tad more sorry about running through the living room, through the doorway of our bedroom, jumping on the bed until the springs broke. The picture tells how we dealt with that. Yeah, that's me sitting on the broken bed springs with sisters Jane and Chris above me.

Perhaps I've divulged too much.

Eventually, we learned the reason for the incessant altar calls; the truth was revealed but didn't necessarily set anyone free. Unless it did. Turns out, the pastor's wife was having an affair with the head deacon, so the pastor decided to make us all pay for their "sins." But, a call to the altar every single Sunday, holding up closing time? That was payment enough for this country kid.

Since then, I listen to Leonard Cohen instead. He's the only preacher I need. Now, some might think repentance is in order when they hear this song. What can I say, it makes me want to dance. To paraphrase what he says at the end, "Cheerfulness keeps breaking through."  Here's Brother Leonard with "The Future."

He wrote this song in 1992. Sounds pretty prophetic to me.


Posted by Teresa Evangeline at 11:51 AM