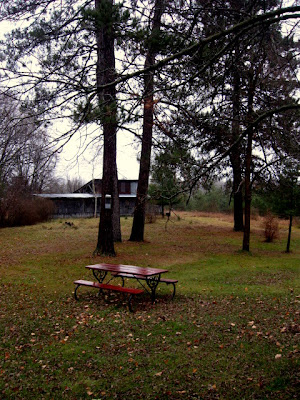 We were experiencing a mid-November thunderstorm this morning, starting with a soft rain that escalated into lightning and a low rumbling off in the distance. I often see the world's weather patterns as mirrors of where we are in the world. I don't mean geographically, I'm referring to our thoughts if not our fears. Yes, it can be seen in something as large as Sandy, when just before the election the entire nation seemed to be waiting in fear for whatever storm would soon be realized. Perhaps it's in the wind which will sometimes arrive in gale proportions, blowing up dust that almost obliterates the emotional landscape causing confusion about which direction our lives should take. Or it arrives with the rain, either torrential or softly falling, depending on our outlook, literally. In my neck of the woods it can arrive in a snowstorm. Let me give you an example out of my own life.

Many years ago (a lot of my stories seem to begin this way now), in the late 1970's, after my first divorce, I was traveling as a salesperson around the upper mid-west selling Native American jewelry, made in the southwest, to jewelry stores who were just becoming aware of the resurgence of interest in this type of jewelry. Fashion magazines had caught on to it and sales were rapidly improving.

I was in the southern part of the state in early March, staying overnight at a motel along the interstate, filled with anxiety and uncertainty about a relationship I had become involved in. Our relationship began in the summer, having met in the library in this town where I now live, but he always went to Minneapolis to work for the winter and the winter had been long. Trying to maintain a long distance relationship, particularly before the advent of cellphones or email, was problematic, to say the least.

I had already come to see signs and symbols in life, and so that night in the motel became sort of a not-so-fun House of Mirrors. The fact that the light switch, which was also a flourescent  night light, had a family praying around a table with the mother's head missing was a bit unnerving. I tried not to read too much into it and fitfully fell asleep.

Sometime overnight, a snowstorm blew in that quickly developed into blizzard proportions. I was supposed to be in Minneapolis for an appointment with a well-known jewelry store and a date with my boyfriend to see "The Deer Hunter," a film we were both looking forward to seeing. I decided to go ahead and make an attempt at Minneapolis, which was about two hours away normally. As I was leaving town in the storm, a state trooper stopped me and told me that if I insisted on leaving town no one would come out to rescue me. I would be on my own.

Fairly young and overly foolish, I left town, heading north into the heart of the storm. It didn't take long before I started praying. Cars had slid under semi-trucks and several others were sprawled in the ditches on both sides, which was not exactly encouraging. Visibility was pretty much zero. I was flying almost on intuition, as weird as that might sound. Then, right in front of me was a UPS truck. I could barely make out his taillights. I followed them, hoping he would remain on the road, as he was my only hope (dare I add Obi Wan Kenobi?)

This went on mile after endless mile. After a while, I could see that this was really a ground blizzard. The snow was viciously blowing across the open prairie, but blue skies were shining right above me. I could see them, but not experience them. It was this ray of hope that kept me going. There was no going back, I had to keep moving forward, see what unfolded, and expect a positive outcome. The expectation of good had become a spiritual practice for me. Practice being the key word.

Not long after that affirmation, it was as though a veil had lifted with a line drawn across the entire landscape. The snow not only had stopped, but there was no evidence it ever existed. If it was behind me, I couldn't see it. There were beautiful blue skies and clear roads without even a hint of ice or snow. I drove into Minneapolis in gratitude.

I didn't make it to my appointment with the jewelry store that day. We rescheduled, with a substantial sale as the outcome. The date with my boyfriend was another matter. Yes, we did go to see "The Deer Hunter" that evening. What we were not prepared for was the emotional assault the movie would inflict on us, and so, afterwards, not being fully aware of what happened, we got into a terrible argument and the relationship, already balancing rather precariously, was derailed. We made several attempts to get back on track, none of them successful.

I'm not even sure what my original point was, but maybe it's this: sometimes, and maybe always, the weather seems to be an indicator of my emotional landscape and it might serve me well to look around and see what's happening out there that's indicative of what's happening in here, in my mind and even my heart. And then remember that I can control the "weather" through my thoughts and my desire to find peace and contentment in life as I move forward with greater assurance of a positive and healthy outcome.

Anyhoo, this whole train of thought probably should have been derailed before I let it leave the station, but it all started because I couldn't get this darn song out of my head. About the same time this story took place, I was also singing in a country and western band on the weekends and I would often sing the songs of Jessi Colter. This one hopped on board my train of thought yesterday afternoon and now I'm stuck with it for a while. Here's Jessi and her hubby, Waylon Jennings, who passed on in 2002:

"And every road we took, God knows, our search was for the truth...."

The photo of my back yard was taken a short time ago, after the storm, a light rain still falling....

Posted by Teresa Evangeline at 12:42 PM