Mysteries Not Found in Dictionaries 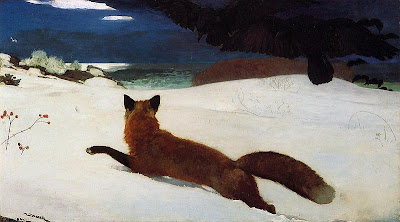 My love of language has followed me around all my life. Or, perhaps I've been chasing after it. Either way, it has informed my path like nothing else. Whether written, spoken, or sung, the word itself is what gives my life direction, maybe even purpose, and a depth of meaning that is now becoming more apparent and more deeply rooted.

My love of dictionaries has played a major role in all of this - finding the right word and discovering its etymology - but this can only take us so far into meaning. There are things that cannot be found in a book; some things can only be discovered through experience and circumstance, and some things remain elusive as though the mystery itself is the meaning.

Take the red fox I saw early this morning running down the road past my house, a car following it very slowly, not wanting to harm it in any way, almost shepherding it along the road. It ran on, the car continued to follow it slowly until they were both out of sight. I wanted so badly for the fox to run into the woods, to find refuge there. Why wasn't it willing to leave the road?  Why didn't it run into the woods or the field beyond, its natural habitat?

Though I have looked at this image and its implications - the symbolic nature of it, ripe with metaphor - the whole scene has left me feeling a bit unsettled. Sometimes there are no answers, only questions. And that's okay.


~ W.S. Merwin, from The Shadow of Sirius

Posted by Teresa Evangeline at 2:27 PM