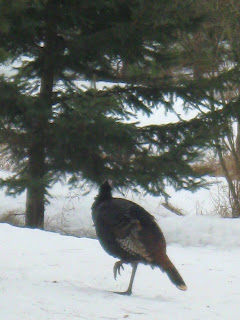 It took the Welcome Wagon long enough but they finally showed up yesterday afternoon. The Wild Turkeys, my fine feathered friends. While I was en route home from the Southwest I had put in a request to the Universe that I'd like to have the turkeys there to greet me. And they were. Right after I crossed the border into Minnesota a small flock was pecking around in a field next to the highway, the only flock I'd seen since the San Juans a few weeks earlier. San Juans being mountains, not a family of turkeys. 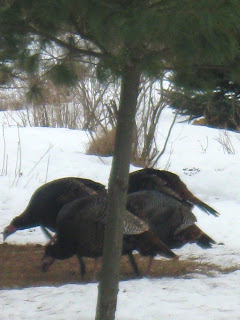 It was a nice sight, but I guess I should have been more specific. Not that I'm an ingrate. I was just hoping for something more. Such as, in my yard. So when I got up yesterday morning I thought again how nice it would be to see that little flock that lives in the nearby woods. A couple of hours later I was nodding off on the couch while reading when I got the nudge to get up and look out the kitchen window. There they were. The Gang of Eight is now the Gang of Four. They hung around for almost an hour, mostly under one of the large Norway pines in the back yard. 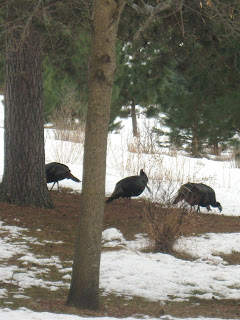 The photos aren't good, taken from inside the house with little chance for a clear view. The last time I saw them here, sometime in late fall, I tried to sneak around the corner of the house to take their picture and they hurried off, wanting nothing to do with it. You'd think they were members of some indigenous tribe who believe the camera steals their soul if you take their picture. And they are. Indigenous. I'm not sure how they feel about their souls. So, again, the pictures aren't good, but I sure had a good time watching them. They really are beautiful birds. I can't imagine ever tiring of their presence. It made a day of steel gray skies a whole lot nicer. 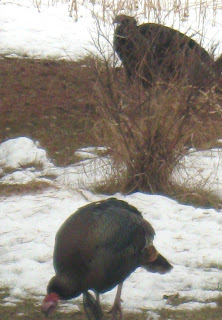 Posted by Teresa Evangeline at 8:41 AM