To Wildlife and Breaking Bread 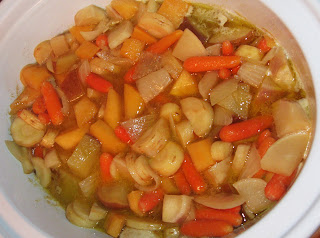 When I finally settled into a place of calmed thought yesterday, things really started happening. Good things. That's how it works. I felt like all of nature came out to play. Well, 'all' might be a bit of hyperbole, but it felt that way at the time. I know some of you, maybe all, might be thinking, Will she never stop blathering about that wildlife?  Apparently the answer is no. It makes me happy.

I was wondering if the deer would show up again. After all, the turkeys had been around off and on all day, wandering between here and the neighbors (those fickle birds), and I was hoping the deer would bed down again in the yard. It feels good to fall asleep with animals right outside the door. Shortly after, four wandered in and stood around under that same big Norway. It's as though that tree has magical powers. There are others on the property, some only a few feet away, but that one seems to hold the key.

While I watched, five more wandered in and they all congregated around that tree!  Nine! Here's the photo, taken inside of course, after I came to my senses and decided to capture it on, uh, film (digital just does not have the same ring to it).


I watched the goings-on for a few minutes, some of them watched me back. I noticed something in the pines had caught their attention. They stood looking in that direction. Then one of them headed into the pines to either get a closer look or flush out whatever it was they saw. I assumed it was the turkeys who had just been through a short while earlier. Yet another fine lesson on not assuming anything.

While I watched, an animal moved through the pines and then out into the open, right behind the deer, heading for the old chicken coop. It was a large red fox!  Beautiful!  I hadn't seen it since last summer. I was torn in that moment between just watching and capturing it on camera. Well, I tried to do both and all I got in my camera was an orange-red blur. Now, I'm hoping it's a her and there will be kits in the spring. Good thing it's not an active chicken coop. I'd have a lot of fixing up of the coop to do.

I cannot imagine my life without wildlife. Besides the usual sightings as a child growing up in the country, my parents built what was then referred to as a wild animal park, back in the early '60's. They built it from the ground up, bought deer from other parks to roam freely so people could walk around the park and even hand feed them. There were pens with several other animals, as well. Bear, fox, buffalo (which will have their own post someday), and such. It gave people a chance to see these animals close up. Now, please keep in mind, this was a less-than-enlightened time and my parents were not the first or the only to think this was a good idea. It was, shall I say, a going concern. They named it Deer Valley.

It was a lot of work. Here's a photo, taken when I was eleven. Note the brush pile behind me.  Yeah. That's my mom, piling brush while we take a break. As long a break as we could get away with. My older sister, Christy, is on the right. 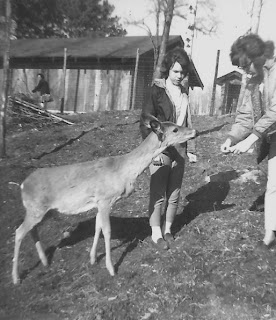 Meanwhile, back at Lonewolf, some of the deer wandered into the woods for the night and some decided to make camp under the tree just outside my window. As darkness fell, they bedded down. 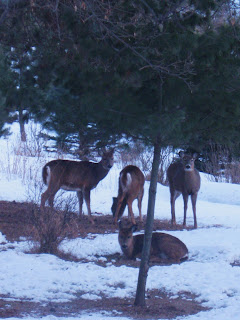 I woke up a few times during the night, hoping they were still there. At first light, I looked outside my bedroom window. They'd already broke camp. Then I saw movement out of the corner of my eye and there was one looking back at me, just a few feet away. I looked, he looked, and then I laid back down and dozed off again for awhile. Six o'clock and all was well.


P.S. Tonight, the neighbors are coming over for some homemade vegetable soup, my first batch in the slow-cooker Coleman and Britta gave me for Christmas (photo at the top). I hadn't had a chance to use it yet, as I'd high-tailed it out of here right after the new year, heading for the Southwest. I threw in all the root vegetables I could think of : parsnips, rutabagas, turnips, potatoes, carrots and onions, along with some butter, chicken stock and a little S&P. It turned out pretty yummy, if I do say so myself. They're bringing the bread. It's nice, breaking bread with the neighbors. We share a love of wildlife and simple living.
Posted by Teresa Evangeline at 11:45 AM