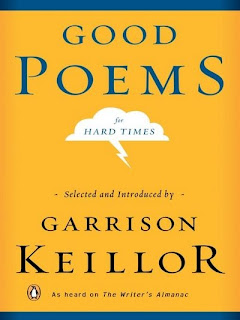 Yesterday, I bought myself a new, blue, spiral bound notebook. I use these at my computer to make notes an write down quotes that resonate with me for whatever reason in that moment. Sometimes these notes become subjects for a blog post, other times they languish and get put on the back burner. I have a few of these notebooks in a variety of sizes and colors. Nothing like a fresh notebook of empty white pages ready to be filled with new ideas.

Most mornings, I open a book of poetry. It might be a particular poem I'd been meaning to take another look at, or a certain poet with whom I wanted to become more familiar. Sometimes it's random. I just take one from the shelf, open it up and see what it has to say to me. This morning, it was a book of poetry compiled by Garrison Keillor from his public radio show, The Writer's Almanac. It's titled, Good Poems for Hard Times. I opened it to a poem by Ted Kooser. Ted is sort of the poet's everyman. He was an insurance agent in Nebraska for most of his life who went on to become the Poet Laureate of The United States. This is the poem:

The bright wire rolls like a porpoise
in and out of the calm blue sea
of the cover, or perhaps like a sleeper
twisting in and out of his dreams,
for it could hold a record of dreams
if you wanted to buy it for that,
though it seems to be meant for
more serious work, with its
college-ruled lines and its cover
that states in emphatic white letters,
5 SUBJECT NOTEBOOK. It seems
a part of growing old is no longer
to have five subjects, each
demanding an equal share of attention,
set apart by brown cardboard dividers,
but instead to stand in a drugstore
and hang on to one subject
a little too long, like this notebook
you weigh in your hands, passing
your fingers over its surfaces
as if it were some kind of wonder.

Well, I may have been hanging onto one subject a little too long yesterday and so, today, here was this message encouraging me to let go and remember again the empty white pages that await, ready to begin again.

Here are my first few entries in my new, blue notebook. You might notice a theme emerged. It's a lesson I'm still learning, apparently. I'm also learning to embrace it wholeheartedly.

Solitude gives birth to the original in us, to beauty unfamiliar and perilous - to poetry.
~ Thomas Mann

Without great solitude no serious work is possible.
~ Pablo Picasso

You need not leave your room. Remain sitting at your table and listen. You need not even listen, simply wait, just learn to become quiet, and still, and solitary. The world will freely offer itself to you to be unmasked. It has no choice, it will roll in ecstasy at your feet.
~ Franz Kafka


Posted by Teresa Evangeline at 5:58 PM