Here In The Real World 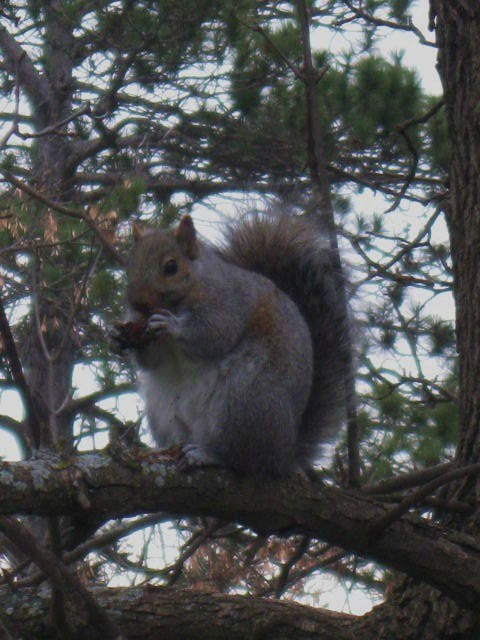 Since my return from Santa Fe and the southwest every day has been mostly sunny and in the high 40's. The snow has been melting and dripping from the eaves all day. It took a couple of days for the squirrels and birds to discover my return and with it a replenished feeder. This morning, while the jays kept a cautious distance, the squirrels duked it out. One in particular seemed to have commandeered it and was holding his ground, hard fought, and wasn't about to give it up.

The large black squirrel, who seems to have slimmed down a bit in my absence, was attempting a coup. The Colonel, a large gray squirrel who'd placed himself in charge of the feeder, wouldn't let him anywhere near. He chased him into no man's land, in this case two trees over, and let him know in no uncertain terms those nuts and seeds were his by God, and he would not go down without a fight. While they tussled a couple of chickadees flew in and snagged a few appetizers. Shortly thereafter The Colonel returned and continued to gorge himself. As he grew lethargic a couple of blue jays set down near him and quietly set about picking through the leftovers.

Gluttony assuaged, he leapt, well, plopped really, onto a nearby crab apple branch, clung tenaciously to it while he got his bearings with all that new weight he was packing, then climbed down, and into the woods he went, to sleep it off, I suppose.

Those crazy little critters. How I missed them. And all from my kitchen window. Front row seats, here in the real world.

And for those who like a soundtrack, here is George Jones singing Alan Jackson's song, "Here in the Real World."  Alan's good, but there's no one like George. Besides, my friend, Michael, does a spot on impersonation of him that had me in stitches at the Blue Corn Cafe on a cold night in Santa Fe, week before last. Here's George (Now, get up and dance, Kittie and Dick, Jack and Brenda, Linda and Art, all you couples out there, even if you're not a couple, dance anyway):


The Colonel, at the top. Cheeky little thing.
Posted by Teresa Evangeline at 6:11 PM