The Bone Lady That Lives Inside Me 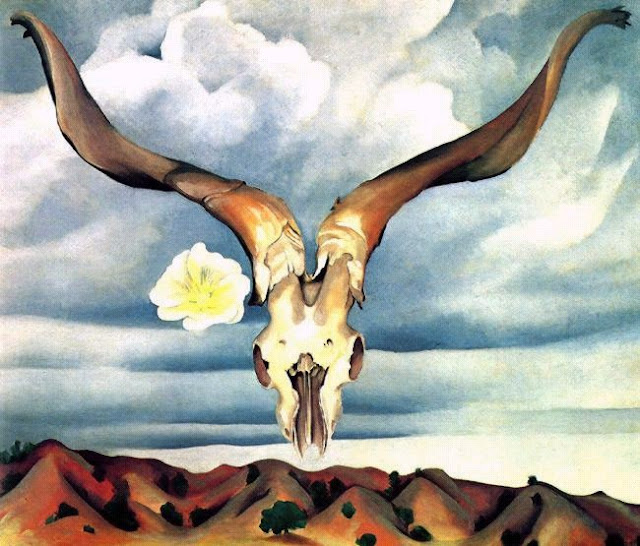 Shortly after I moved into my farmhouse in Ansel, back in the spring of 1990, I realized my passion for bones might just have found a rather extensive playing field. Although I only owned five and a half acres, I was surrounded by pasture land, grazing for the cattle owned by my neighbors. These neighbors were over a mile away to the north and about three miles away to the south, but I could look out on any given day, for at least half the year, and see their cattle off in the distance. I told myself, 'Thar's bones in them thar hills."  At least I hoped so.

I had also been a big fan of Georgia O'Keeffe and all things Southwest, as I may have mentioned a time or two, and I was particularly enamored of her paintings that included bones, skulls and such. I don't view it as a ghoulish interest, just loved the shapes and I suppose the romantic insinuation of the west captured in them.

So, not too long after I'd moved in, I went on a bone expedition to see what I could turn up. It didn't yield the skulls I'd hoped for, but a few larger bones here and there. I hauled my booty home, bones that is, and placed them in my flower beds near the porch and main entrance. As I was hauling them, I realized that I may well become known as The Bone Lady as the years went by, and my semi-reclusive nature would not do much to alter that image. Not that I had too many folks who were paying attention. I just hoped any neighbor kids that might become aware of my presence wouldn't start tagging my house and then run like hell, crazy lady inside and all. 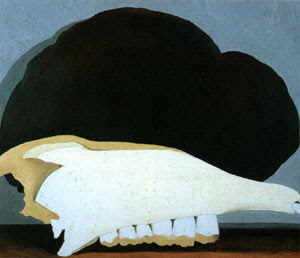 Inside my house were more bones: a small muskrat skull, a beaver skull a friend had painted a flower on, all very tacky and wonderful, a couple of jawbones, along with various and sundry small bones that had a look to them that appealed to me for reasons I can't call forth now. That's just the way it was. I liked bones.

Every time I looked out on those small rolling hills, I could well imagine buffalo roaming them many years before, and because I like to name things, I named my place Buffalo Woman Ridge.

When I started spending a part of each spring in the west, particularly the Southwest, I longed to find a buffalo skull to hang over my imagined entrance at the end of my driveway. I thought it would look kinda cool. I didn't expect to actually find one in the wild, but thought I might find someone else who had. I once stopped in Alamosa, Colorado, en route home, to check out some skulls at a roadside stop. They ran a bit over my allowed budget and so I never owned one.

The years went by and I eventually moved to the southwest, Santa Fe, to be exact. 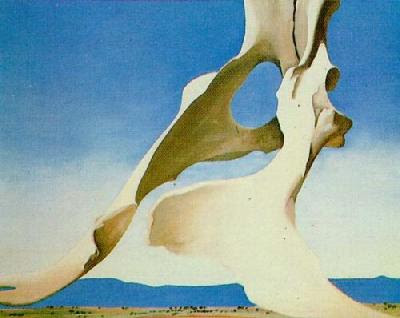 One of my early daytrips there took me to an outlier of Salinas National Monument. It consists of old missions in three parts spread over several miles. It's south of Santa Fe, off the Turquoise Trail. It was at one of these that I wandered off in the cover of pinons to take a pee and hit pay dirt, so to speak. Right next to me were the sun-bleached skeletal remains of a cow or deer. Which one, I couldn't say for certain, but they were bones worth hauling back home with me, I knew that. The skull had already been parlayed into someone's home decor, either animal or human, so that was that, but what did remain was one very fine pelvis bone, very O'keeffe-ish, and it went home with me, along with several rib bones. There was a potter who showed at the gallery I worked at and she had recently started doing pots with bone handles, so I scored those for her. I left them in the trunk of my car and next time she stopped in we switched them over to hers. We were both happy.

The pelvis bone graced the entrance to my home for several years.

When I was planning to return to Minnesota, I took it down to my sister's home in Texas Hill Country and there it remains, gracing her garden entrance. It was a perfect fit.

My life here at Lonewolf is bone free as I write this. I don't have the unexplainable yearning I once had. I guess my love of live animals far outweighs my love of their bones. But, if I should come across one or two outstanding examples, or a skull shows up somewhere in my wanderings, I shan't pass them up. Somewhere deep inside me, The Bone Lady still lives. 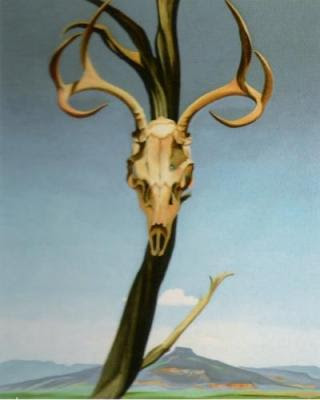 All the images are of O'Keeffe paintings, of course.
Posted by Teresa Evangeline at 12:32 PM