At Home in My One Room Schoolhouse 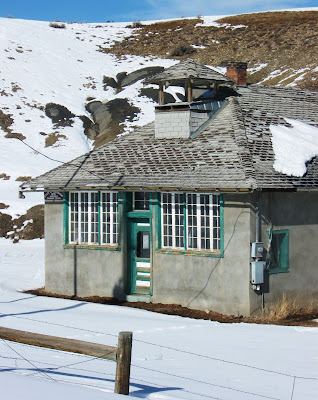 Yesterday, I decorated my room. No, that's not it. Not exactly. I'll get to that.

This past Sunday night I stayed with my friends, Anne and Paxton, at their home west of Taos. En route, while crossing the Great Divide, I gave some thought to the notion that we would have a good visit, then I would pack up the stuff I had stored there when I left Santa Fe, and head back to Minnesota.

Just before passing through a tiny little town called Chromo I stopped to take some photographs of an abandoned, one-room schoolhouse at the edge of town. I love these little bits of history, what they represent. 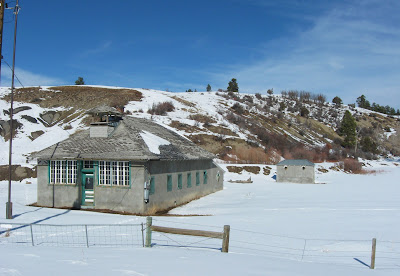 After arriving in the late afternoon, while Anne and I visited, we packed my car. Then we ate some pizza and stayed up talking late into the night.

In the middle of the night I woke up and was lying there waiting for I knew not what. Until I did. The almost-full moon was now over the house and was shining in the window. I was not going home to Minnesota yet. I was leaving Anne's house and that's all I knew. And not because she wanted me out, although I suppose that is a possibility, but I knew I should leave and listen for guidance.

In the morning, while driving the Rim Road, I felt I was supposed to go into Taos and look for a room. I pulled over at the first intersection before heading into town, briefly disagreed, and played with the notion of heading down to Sedona. I even called Anne, who makes regular visits, to ask how long it took to get there. Maybe I was supposed to be there, an idea that didn't feel altogether disagreeable. I wavered. And then I sat and listened. Whether I liked it or not, for now at least, I was going into Taos. Not an altogether disagreeable option, either.

When I drove by a certain motel I knew that was where I should be. Not the spiffiest joint in town, but it offers those things I need right now - off the road with a certain sense of privacy and quiet, a courtyard with pinon trees as well as trees outside almost every room, coyote fencing, and ristras hanging from the vigas - lots of southwestern ambiance, something I've been missing, and it's cozy to boot (I think that's a fairly decent pun, but I might be prejudiced). It also just so happens to be the first motel I ever checked into in New Mexico many years ago.

The cool thing is, I have two of my favorite paintings and a favorite framed print in my car. Well, I did have. They are now gracing my humble abode. Had I waited to pack up my stuff, I would not have them now for my room.

I think one of the things I may be learning is that, yes, it's good to have a permanent home to always return to, and I'm very grateful for Lonewolf, for all it offers me, and I will be equally grateful to return there, but it's also good to feel at home wherever I happen to be.

Having spent most of my life, since a teenager really, in one relationship or another, I became used to navigating through life with someone there to share the ups and downs, the day to day exigencies that can complicate or relieve our human experience, sort of a built-in support system that creates a sense of security. And even though I've spent the better part of the last five years sans a relationship, I find I am still learning to appreciate and honor a solo life. Learning to feel at home wherever I am means learning to feel at home with myself. And that, as they say, is big.

So, I did a little decorating, leaning my artwork against the walls, bought some groceries at the store down the road, asked for and received a small refrigerator, and took a walk around the courtyard in the evening light. It's feeling kinda homey.

I almost forgot to tell you: when I crossed over into New Mexico from Utah on Sunday, in less than a quarter of a mile there were two crows and a coyote. The crows were standing over their dinner in the ditch, whoever the poor critter had been, and the coyote was trotting away from them, down in a hollow, across a snow-covered field. He had decided it wasn't worth it or they had shared before I came over the hill. That second scenario isn't likely but one never knows what goes on when we're not there to insert our conditioned human thinking. Either way, they made a fine welcoming committee.

Then, the morning after I arrived here, a lone crow cawed right outside my door, announcing my arrival. This is where I Am. Another day of learning in my own little one-room schoolhouse. And I don't intend to abandon it. I will be carrying it with me.


Posted by Teresa Evangeline at 12:23 PM