Mapping Our Journey in an Open Boat 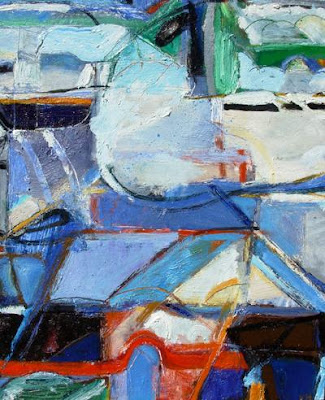 I'm continually amazed by the avenues Life provides for enriching our lives and enlightening our thoughts through art and literature, all the myriad ways we learn and grow in this ever-expanding universe of thought. To wit:  I recently asked my friend, Michael von Helms, if I could use his painting, "Open Boat," with the above quote, a quote I found discomfiting and at the same time comforting. I seem to like the paradoxes of Life. They tend to create an atmosphere in which further discovery can be made. And discovery seems to be what Life is all about.

Michael responded with a "You betcha," a nod to my Minnesota roots. The first time I ever laid eyes on him at the gallery in Santa Fe, back in the spring of '07, when he heard my speech and guessed, correctly of course, its origin, we immediately and with the greatest of ease, went into a conversation right out of the movie, "Fargo."  It's this thing we do. You probably have friends with whom you also have this connection. One word, one allusion, and you're off and running. It's fun, isn't it, discovery?

He followed his "you betcha," with these words describing his inspiration for the painting:

The title came to me from the corridors of memory. I had read a short story by Stephen Spender (?) titled, "The Open Boat." Taken literally, the story was a nail biter regarding the author's sea wreck and subsequent journey to final safety of land, adrift without oar or sail upon the open sea. As a Life Metaphor, however, the tale was a far more disturbing story of an individual's total loss of control regarding his life...a powerful example of such an unsettling predicament...an exasperating, agonizing "Journey" to final safety.

Dare I say, it's a place both of us have found ourselves in, metaphorically speaking, something we've talked about in our previous exchanges. Perhaps you've experienced something similar in your own life, an open boat at sea, with no land in sight.


Anyway, after a little googling, I recalled Stephen Spender as a poet of some magnitude whose work I had read previously, but had long forgotten. Obviously, Michael had him on his mind, as well. I also read about Stephen Crane, author of "The Open Boat,"  and his own personal experience going from Florida to Cuba. Michael and I exchanged a couple of emails of mutual recognition, in which he referred to me as Macduff (a character from Macbeth), but that will have to wait for another post. This literary stew I'm creating has enough ingredients for now.

Stephen Spender led to John Berryman (who deserves and will have a post of his own very soon), and the next thing I know, I'm agog with a memory-jarring love of literature, particularly poetry. I ran across the poem by Spender entitled, "I Think Continually of Those Who Were Truly Great."   In a forward of sorts, Spender describes the thoughts which inspired him to write it, including allusions to Beethoven's late quartets, Russian movies by Eisenstein, D.H. Lawrence and his ideas about sex, and Michelangelo. So you see, this drift towards one thing leads to another and... Surely it's happened to you, too.

These lines from the above mentioned poem, with some license being taken by me in its structure, really caught my eye and heart:

I think continually of those who were truly great
Who, from the womb, remembered the soul's history ...
...whose lovely ambition
Was that their lips still touched with fire
Should tell of the Spirit clothed from head to foot in song...

What is precious is never to forget
The essential delight of the blood drawn from the ageless springs
Breaking through rocks in worlds before our earth...

The names of those who in their lives fought for life
Who wore at their hearts the fire's centre.
Born of the sun they traveled a short while towards the sun
And left the vivid air signed with their honor.

You can hear the entire poem accompanied by beautiful art, paintings and photographs, here (I don't believe it's Spender reading, but a fine reader nonetheless) :
http://www.youtube.com/watch?v=DmraQ4Rgf90

What I love about Michael's painting is that the open boat seems to be surrounded by a number of possible sails. Seeing the world through metaphor is part of discovery, of mapping our journey, and what I appreciate in abstract art, as well as in friendships and connections and open boats.