A Winter Afternoon Along the Colorado River 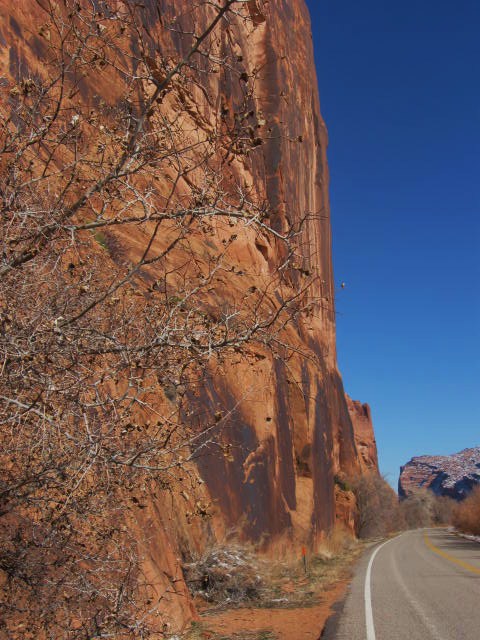 One of the things I'm most enjoying about being back in Moab is seeing the landscape with fresh eyes. I've been here many times through the years and taken many photos, but this trip is making everything feel brand new. I've never been here when it was this chilly and with this much snow on the ground, but, as I said, I didn't come for the weather, I came for a change of scenery and perspective. And that I'm getting. 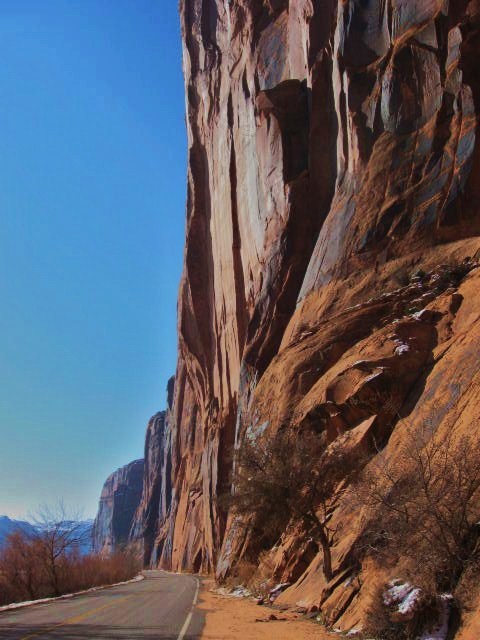 Yesterday, JB and I drove down Potash Road, which runs just outside Moab. On one side is the Colorado River and on the other are walls of red rock where large sections are covered in a patina that has a purplish cast to it. It's on this patina that the Anasazi and Fremont Indians created petroglyphs, what we sometimes refer to as rock art. We can only guess as to their motive for creating these images on rock, but it seems the impulse to create art is essential to our nature. Not too far down the road is Canyonlands National Park, which has a large section of rock art referred to as Newspaper Rock. I took photos of it many years ago and perhaps will again this trip. It's a section of rock wall covered with a vast number of images, symbols and such, seeming to depict life as they knew it, perhaps even commemorating events of their times.

Those we saw yesterday are fewer, but no less intriguing. When I see these, I think of the phrase, The Family of Man. We live in far different times now, but inside we are still the same. 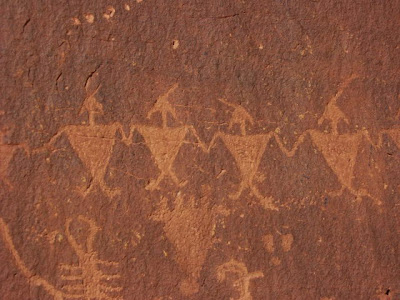 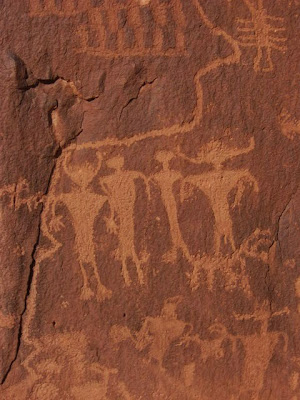 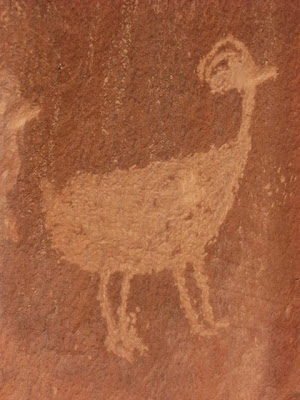 We did a short hike in the afternoon, going up a small canyon, only about a half mile or so. The pool of water at the end of the trail was frozen, but the sky was blue and the sun warmed us as we sat on the rock ledge above. We talked of an early spring camping trip, many years ago. We were somewhere in southern New Mexico, sitting beside a campfire along the Rio Grande. Despite the fire in front of us, and the distant light of a few million stars over our heads, we were colder than we'd ever been. And there had been some cold nights. One night up at Natural Bridges, here in Utah, was a very close second. It was the middle of May, but in the high desert the nights can get cold long after the days start heading into summer.

Yesterday, I rested my hiking bag on a rock, laid down on my back on the smooth red rock and basked in the warm glow of the sunlight on my face. It was a perfect winter afternoon. 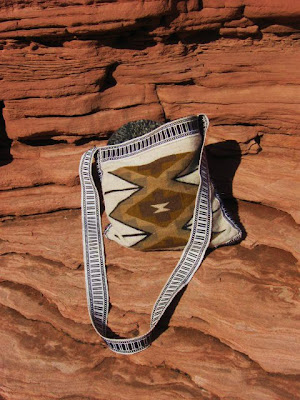 Later, on the drive home, with JB at the wheel, the car bending into curve after gentle curve along the Colorado River, I turned my head toward the window, leaned back, closed my eyes, and felt the sun sparkling off my face. And I thought:  it really doesn't get any better than this.

These are my own photos and will continue to be, unless noted.
Posted by Teresa Evangeline at 8:49 PM