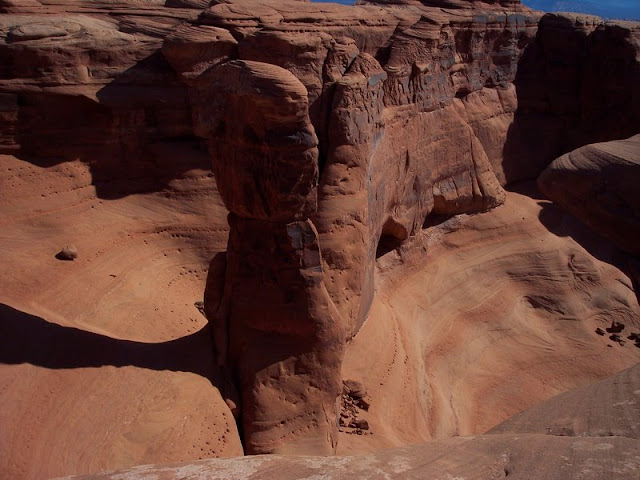 The Eagle has landed, or in this case, the Nissan. I arrived in Moab yesterday afternoon. The weather is a bit cold, but I don't mind. It wasn't the weather I came for, nor why I decided to hit the road. It's the fresh perspective that seems to be pervading my thoughts, my life, and it feels good. Snow-capped red rock against blue sky is a pretty fine thing to wake up to.

Two days ago, while riding on the shoulders of the Rocky Mountains, I became aware of a greater strength inside me, as though I was drawing from their strength. As I emerged from the Eisenhower Tunnel, an ever-so-slightly new way of looking at life also emerged and quietly fell into step beside me. Later, while driving out of the Rockies through Glenwood Canyon, gliding along, mile after mile, curve after curve, beauty in my wake and around every corner, I became even more aware of this strength quietly moving around and through me, guiding my every move.

I was reminded of a previous trip, one I took with my sister, Jane, going out west together in the early spring of '95. We were aware that weather patterns in the mountains can be unpredictable, but we had our sights set on Pagosa Springs. So, with some trepidation and the promise of hot springs waiting on the other side, we headed up Wolf Creek Pass in the early afternoon. Jane was driving. I was navigating. Half way up the pass the snow started. By the time we got to the top it was coming down pretty good and darkness was falling fast. We had no recourse, but to keep going.

While Jane drove, I kept my eyes on the side of the road, warning her if we strayed too close to the edge. We both knew fear was starting to gain a toehold in our thinking and we found ourselves bolstering each other with false merriment over our unexpected adventure. As we headed down the pass, heavy snow was filling up the night with large, mesmerizing flakes. I think we were both quietly praying for some form of salvation there on Wolf Creek Pass.

It arrived in the form of a semi-truck, just ahead of us in the road. We were able to follow him as he blazed a trail through that snowy night, his tail lights guiding us down, every long mile of the way. By the time we finally landed in Pagosa Springs, fear had given way to gratitude and a gigantic sense of relief filled the car. Boy, did those hot springs feel good, the San Juan River running next to them, the snow lying gently along its banks.

So, here I am. Morning in Moab. A bowl of Greek yogurt with honey and raspberries for a belated breakfast, the La Sal Mountains standing sentry right outside the door. It's good to be back at my playground in the west.

I'll be sharing my own photos soon. In the meantime, another photo courtesy of JB, here in red rock country, in slightly warmer times.
Posted by Teresa Evangeline at 2:32 PM