Another Adventure Under Our Belts 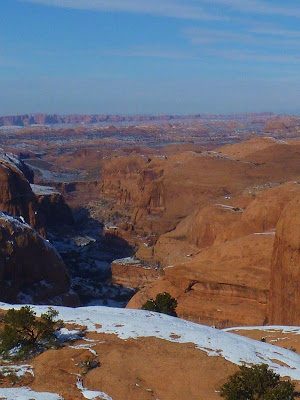 There's a road that meanders up above Moab to an area known as Sand Flats. It continues beyond that into some fairly rugged country, designed more for mountain bikers and bullet-proof twenty-somethings. You know, that age when you feel a sense of invincibility and usually can have a lifestyle that promulgates it? That's not my age. Albeit, I have been in some fine canyons in the last twenty years and still have a pretty adventuresome spirit, along with a desire to get outside my comfort zone and experience life at a level that seems a bit more challenging.  A bit. I do not, however, like to be foolish, and although pretty good at conquering my fears, I've never been too crazy about being afraid for any length of time. 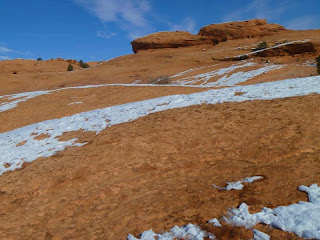 Yesterday was cool, the low 30's, but quite nice for hiking at this altitude and under a clear blue sky. We decided to do some walking on Sand Flats. Sand Flats is a misnomer. It's really a series of rocky hills and this time of year one side of those hills is covered in a few inches of snow. Speaking of snow, since I arrived I've noticed that the snow consists of a much larger than normal crystalline structure -  and it's everywhere, even up in Arches a few days ago, where I first noticed it. It's really quite beautiful. I almost feel guilty walking across it, breaking down the crystals. 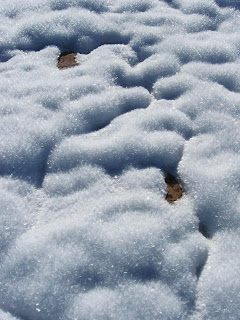 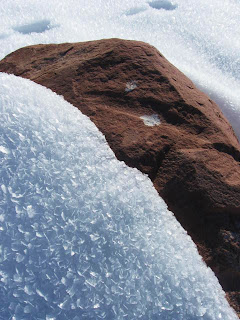 We parked the car and headed into the area, which starts with a marked trail. For those who prefer that. We tend to veer off the trail at the first opportunity. 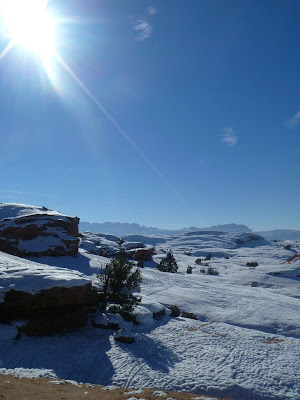 After leaving the trail, and walking for about half an hour, mostly up and down red rock, but occasionally through snow, we decided to take a break. On the next hill over. The problem with that plan is that a fairly steep snow-covered slope lay in front of us. JB is an intrepid hiker and, although never foolish, often a bit more fearless than I. He went down first with small, careful steps and declared it  "a piece of cake."  I took his "piece of cake" with a grain of salt, but decided I need to let go of my fear and be willing to have an adventure. He came back up and helped me down small step by small step. The softness of the snow under the crystals helped with getting our footing. Hang onto that thought. It's key. 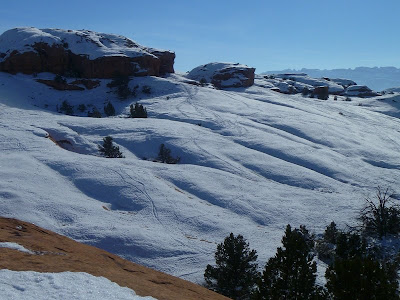 When we got off the slope, (no, that is not the slope, but a previous, easier one. No time for pictures when facing imminent death. But, I digress), the rest was easy going, down along a small stream of frozen water and back up onto a knoll of red rock, the perfect place for a break. As usual, we stayed a little longer than we'd planned, talking about pretty much everything - politics, geology, spirituality, flaws in materia medica, the meaning of life. Stuff like that. JB mentioned the new movie coming out about the young man who had to cut off his own arm after it got lodged in the rocks, while hiking here in Utah. He had listened to an interview on NPR, where the young man had described in pretty harrowing detail his awful predicament. It would not have been a discussion for later in our day. 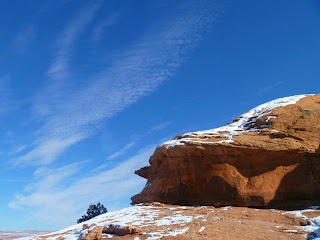 We took pictures, mostly of clouds that were starting to form, creating quite dramatic scenery right over our heads. 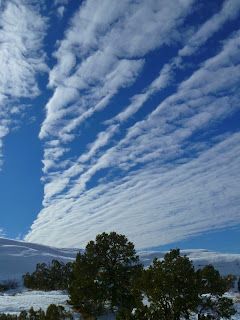 When we decided to start heading back, we thought at first it would be nice to find another route, so as not to traverse the same area, see what we could see. We had a couple of hours of daylight left and plenty of time. Then, we thought better of it and decided to head back on the same path to avoid possible problems. We picked up our trail and followed our footprints coming in, heading back up to the snow covered slope we'd come down an hour or so earlier. 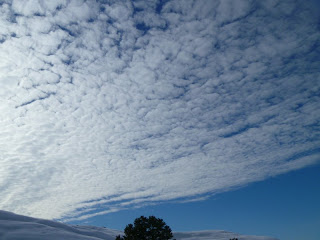 It's always been harder for me going up than coming down, vertigo being a factor. But this time held another factor - the cooling of the day. The gathering clouds and the dip in temperature had changed the snow. It was now icy under those beautiful crystals. Slippery slope may well have been coined in that spot, many years ago. It was a no-can-do for me, that much was certain. JB, having come up behind me, and a more seasoned hiker, wasn't completely convinced until he, too, made an attempt, which culminated in him slipping down, with his fingertips out like claws grasping for a fingerhold of any kind to stop the slide. Though sympathetic, I withheld my laughter, for the time being.

As with our usual gambit when confronted with a "situation," we started the good-natured blame game. He usually begins with something like, "Well, Ollie, here's another fine mess you've gotten us into."  I retort with something equally clever, that I can't recall right now, that may or may not have been peppered with colorful language. Then, we do a minute or so of verbal tussling before getting down to the business of finding a solution. It's traditional.

While I fought back the bit of fear trying to find an entrance, we decided the best course would be to simply head for the direction of the road, which we knew ran alongside us, just not too sure how far away. It was do-able before dark. That was the important bit of information we gathered there. So, off we went, into the wild blue yonder, exchanging clever repartee about our predicament and tales of other adventures we have known. Then we fell into a peaceful silence, one foot in front of the other, stopping to do a quick survey every few minutes to make certain we were still on course. About an hour later, we could see a break in the terrain and a small section of the road down below, about twenty minutes away. Quiet Hallelujahs all around.

We got to the road with our dignity and senses of humor still intact. I wished for chocolate. JB carries a fairly well-stocked backpack, so I thought it not outside the realm of possibility. But, alas and alack, he declared us to be in a chocolate dead zone. I lamented and asked him why he wasn't manifesting some as we walked. He, being a very practical kind of guy, and manifest not being a word he would normally use, uncharacteristically said,  "Dark chocolate."  I retorted with,  "At this point, any chocolate would do."  He said we needed to be on the same page if we hope to manifest something, so I agreed, dark chocolate it would be. Then we kept walking.  A little further down the road and around the next bend, we saw the parking lot below, with JB's truck waiting patiently for us.

After arriving in the parking lot, and while I laughed hysterically about his fingers grasping for anything in his slide into recognition on the snowy slope (he being good-natured and tolerant), JB did his usual going through his backpack, reorganizing it. It's this thing he does. He's a Virgo. After further and deeper digging, he sat something down on the tailgate of the truck next to me.

It had been at the bottom of his bag, and none the worse for wear. I was not about to complain about the condition it was in. It was chocolate. And it was edible. And another adventure was under our belts. 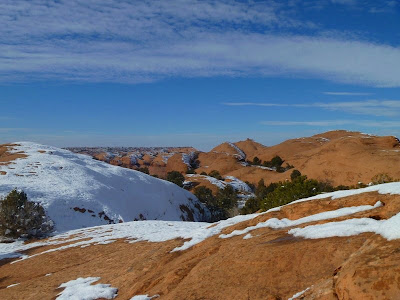 The opening photo, taken at the top of Sand Flats, is Abyss Canyon, a branch of Negro Bill Canyon. That's an improvement on its former appellation, of many years ago. JB and I hiked it together on a previous trip.
Posted by Teresa Evangeline at 12:01 PM