Where the Buffalo Roam 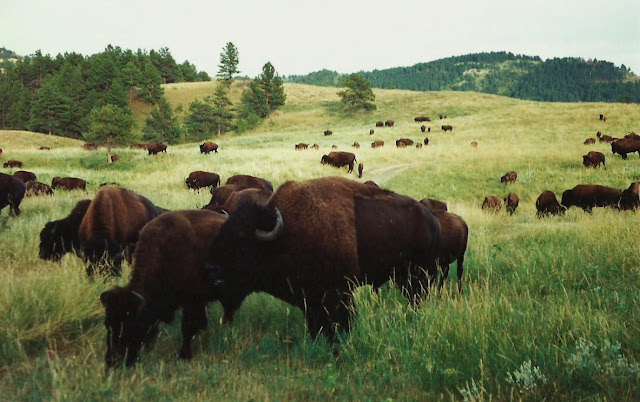 For as long as I've been blogging, I've been threatening to write about my first love, buffalo. They stand among my earliest memories, powerful and strong.

I first became enamored when my family drove to Itasca State Park one childhood summer. At that time, there was a pen with two buffalo just inside the park. It was our first stop. In my mind's eye, I have an  image of myself, about four years old, walking around it, trying to get as close as I could. I remember wanting to look in their eyes. 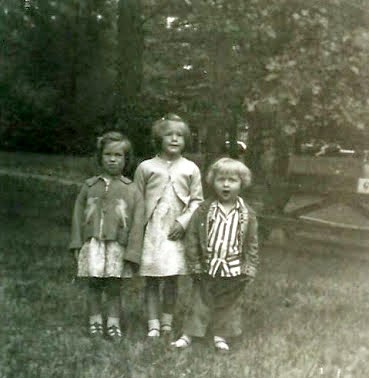 In the photo above, I'm on the left - yellow ducks on a blue sweater - on that long-ago summer day at Itasca. I did not like having my picture taken any more than the wild turkeys in my yard do. Next to me is my sister, Jane, and our friend, Leigh, looking like the original Cabbage Patch Kid.

Eventually we would move on to swim the day away, followed by a picnic of hot dogs roasted on a stick over an open fire - a real stick - and s'mores. For the uninitiated, s'mores consist of a couple squares of good, old-fashioned Hershey's chocolate and a roasted marshmallow, also roasted on a real stick, between two graham crackers. They always left us wanting s'more.

Later, we walked on rocks in shallow water across the headwaters of the Mississippi, hung around a tepee with a real Indian in full regalia, warbonnet and all, looking rather stately despite being surrounded by the trinkets for sale there:  garishly painted drums, rubber tomahawks, little dolls in dark braids with "buckskin" dresses. It was the late 1950's and life seemed simpler. Looking back through somewhat more enlightened eyes, I see something else now.


During this time, my father would spend the workweek away from home while Mom held down the fort on our little farm. He was a carpenter by trade and found work in the newly forming suburbs of Minneapolis. It wasn't easy. We wanted him at home; he wanted us to get above the poverty line. When he showed up on Friday evenings, we would beg him to give us what I then called 'buff-ee-o' rides. I couldn't say buffalo. I was four years old and enunciation wasn't my strong suit. He would get on his hands and knees and run around the living room with one of us on his back, Jane or me, while the other whined for another turn. Well, I whined, Jane might have quietly waited.

Several years later, when my parents built Deer Valley, we had a large pen with a pair of buffalo inside. It consisted of a few acres, but still not a lot of roaming space. It was a moral dilemma for me, wanting them to have oceans of prairie grass on which to roam, and having them there with us, our very own buffalo. Whenever I saw them near the fence line, I would stop and visit with them. Have you ever looked into a buffalo's eye?  It's a pretty remarkable thing. It feels as though you can see through time itself, as though all of time, all of our earthly history is still there, inside that dark orb, the planet Earth itself, rolling through dark and infinite space.

One of my favorite places to spend time is the Black Hills of South Dakota. Outside of Rushmore, in Custer State Park, you can still see small herds roaming among the hills. If the timing is right, they might be near the road, perhaps even crossing it. Seeing them dot the landscape still stirs some deep emotions, ancestral memories perhaps: across great expanses of this country, the sound of several thousand hooves, running, pounding out the rhythm of time. 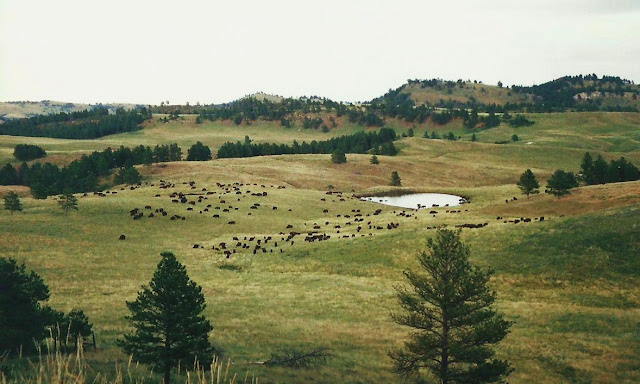 Again, scanned photos from my 35mm.

Posted by Teresa Evangeline at 12:05 PM