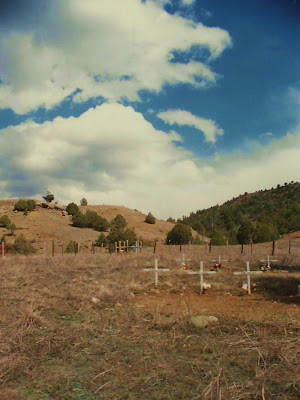 Cemeteries, especially those that have been around a good long time and left in a state of perpetual disrepair, call out to me, sometimes from great distances.  They seem to pop up out of nowhere, alongside the road, quietly nestled in the woods, almost indiscernible to the passer-by. I've found a single gravestone in the woods next to an old abandoned homestead. A friend and I once rode in the bucket of a backhoe, at the operator's invitation, to get to one when the bridge leading to it had been washed out by spring rain. I think of Edward Abbey, who, at his request, was buried in the desert wilderness by a few close friends. Those who know where aren't talkin'. I could go on and on about these little oases of our shared history, the emotions they call forth, the stories they tell.

Cemeteries usually have the same old epitaphs, although occasionally you will find a bit of backstory shared on the gravestone, some laced with humor. From time to time, there's a photograph under oval glass, or inside a small ornate metal door. Or, a few short sentences gets to the heart of the person's life. When an epitaph really stands out, I write it down. I like carrying the thought with me after I've moved on.

A friend and I were on our way to Chaco Canyon when we got sidetracked on the backroads that meander around the hills along the Colorado/New Mexico border. A small cemetery sat under a lone tree just back from the road. It appeared forgotten, but I doubt that was the case. Someone had once been golden to those who knew them. 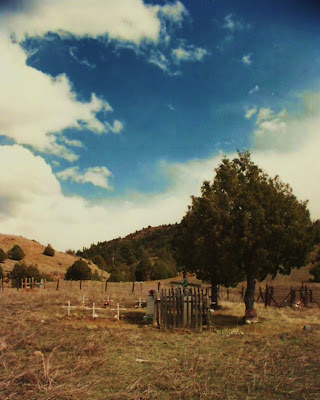 Just inside the cemetery was a gravestone with this epitaph:

The Radiant Mojo: a mystical experience,
the thing that makes life bearable because
it shows us the light and depth and infinity
beyond our ordinary existence; the thing
that tortures us mightily by its absence,
because when it leaves us, there's nothing
but ordinary life again.

Posted by Teresa Evangeline at 10:01 AM