One Painting, Poverty, and a Girl Named Destiny 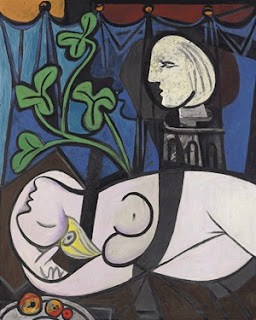 Today, "Nude, Green Leaves and Bust," a 1932 painting by Pablo Picasso, of his mistress, Marie-Therese Walter, goes on public display for the second time. It is showing at the Tate Modern in London. It sold last May for a record price. The bidding, amongst nine people in the room and on the phone, started at $58 million. It was bought by a private collector for $106.5 million. Let me repeat that: 106.5 million dollars.

"Houston," we have a problem.

And duct tape isn't going to fix it.

Last night, 60 Minutes aired a segment about poverty in the U.S., particularly as it affects young people. It was a very sad look at how they feel about it and how it impacts their lives, their view of the world. These were heart-wrenching stories of homelessness and going to bed hungry, told by articulate young people who never expected this would happen to them. A young girl named Destiny really caught my attention. She could have been me. In many ways, she is me. She's really All of us. Her story is Our story.

The segment concluded with a very dismal outlook:  this could well be an entire generation shaped by homelessness and hunger.

44 million of our fellow citizens live in poverty.

You do the math.

Destiny and her family may be living with the accepted definition of poverty, but those malnourished souls who believe money and possessions define it are the truly impoverished.  Destiny's soul is alive and well.

May it always be so.

Posted by Teresa Evangeline at 11:23 AM