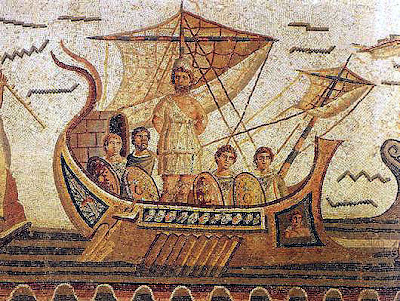 When I was a child I was enamored of mythology. We had two books of myths that filled my imagination to overflowing.  For some reason, that probably had to do with my own desire to escape the confines of my birth place, I kept returning to Icarus and his attempted escape from Crete. He flew on wings his father had made of feathers, with wax to seal them. It wasn't the best choice of materials. I suppose he made do with what he had. Despite his father's warnings poor Icarus flew too close to the sun.  It didn't end well. 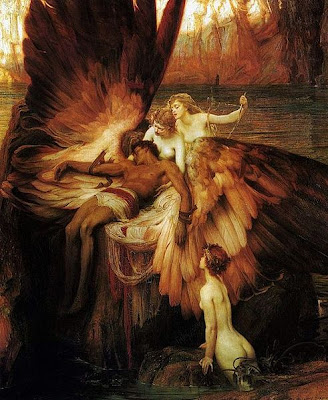 "The Lament for Icarus"   Herbert Draper


I remember my brief confusion when I realized there were two sets of stories, Greek and Roman, each with the same or a similar story line, with the characters names the obvious difference. It took me a little time to figure this all out but eventually some of these myths had a character or characteristic or even a name I preferred over others. I couldn't begin to tell you what they all were now.

It wasn't until I was a teenager that the Odyssey came into my life via tenth grade English class. I became fascinated by this story of Odysseus, the Trojan War, and his journey home. Beset by trials and tribulation, not to mention a delay or two, the names of the principle players and the creatures that tried to thwart his efforts at reaching home all rang a very old bell.

Mmmm. It wasn't until this moment I realized something: while I was reading the poem, "Ithaca," by C. P. Cavafy, at our poetry reading Sunday night, the neighbor's cat, Penelope, was sitting nearby, keeping vigil. Penelope is the name of Odysseus' wife who kept a vigil for her husband, waiting many years for his return. Sort of.

The Odyssey takes place on the sea, but it can also take place in a forest or the desert. It represents the journey we are all on, each of us journeying to Ithaca. I've run across a Cyclops or two (not referring to anyone in particular), allowed some delays to take place, perhaps spent too much time at those Phoenician trading stations. Yep, I'm still learning, and attempting to fill my days with, "sensual perfume of every kind," all while trying to stay away from angry Poseidon and those nasty Laestrygonians. Yes, we do have control over what we hold in our thought and carry in our soul.

Here is Sean Connery reading, "Ithaca,"  with music by Vangelis.

Posted by Teresa Evangeline at 9:45 AM