Wheelbarrows I Have Known and Loved 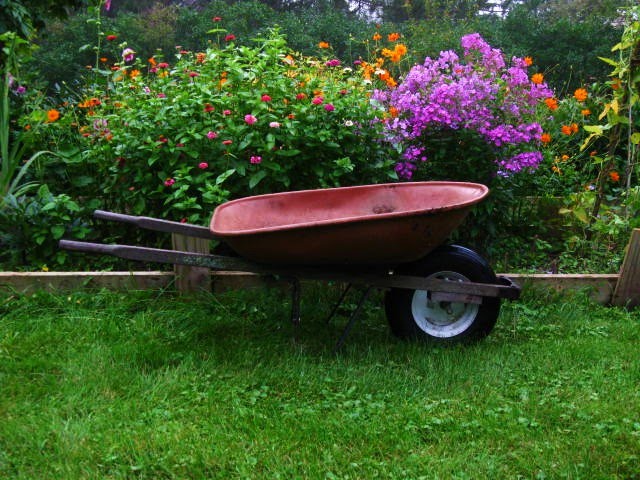 One of the first things I did when I bought my farmhouse in Ansel back in 1990 was buy a wheelbarrow. It was my first of private ownership. No husband came with it. I found it in town at the hardware store. The wheelbarrow. I was as excited as a newly-wed, bringing it home, its deep orange body ripe with possibility. I was so excited I even read the instructions for putting it together. That may sound easy but the reading of instructions strikes terror into the heart of me. I was so in love I set my fears aside, sat down on the grass, and put it together step-by-happy-step. You would have thought I'd invented it. Unfortunately, I do not have any photos of that first love. I will tell you about that sweet thing above later in the story.

We spent many happy and prosperous years together hauling stuff around, like leaves and rocks and dead branches that had blown off in a storm the night before. Even Jake, our Siberian Husky, who met an untimely death (is there another kind?) was carried to his final resting spot with the help of the orange wheelbarrow.

It came along with me when I moved to town about ten years later, its daily use diminishing with town life. But, I liked to look at it from time to time, even talk to it as it sat in the garage taking its rest for awhile. When I moved to Santa Fe in the fall of 2001 it ended up at an ex-husband's house hauling wood and other manly stuff.

While living in Santa Fe I got to pining for it, thinking it might be time to find a replacement. I didn't know if I had a use for it but I knew it was time. I'd think of something. I  like to send out my requests to the Big U and see what it arranges for me so I turned it over. The following day, as I headed down the road to my house, there at the end of a neighbor's driveway was an orange wheelbarrow with a sign on it that said, "Free."  I was almost dumbstruck. I know. Hard to imagine. It was an older model. It had some miles on it, was slightly more shallow, shall we say, but it was mine. I couldn't get my car in my driveway fast enough. I hurried back down to the neighbors and wheeled it home. I was the happiest girl in the whole northern hemisphere.

When I decided to move back to Minnesota several years later, it found a home with another neighbor just up the road. I, too, put it at the end of the driveway with a sign that said, "Free." The neighbor's young grandson who came with to help load it into the back of her pickup truck was grinning from ear to ear. He had big plans for the orange wheelbarrow.

Several weeks ago a fellow blogger posted a photo of her wheelbarrow. It was blue. It was a thing of beauty. And  I coveted it. For the life of me I cannot recall who owns this. Cheryl?  Nancy?  Please let me know. Not that I'm going to come looking for it or anything. I've since gotten beyond it, but that's only because I now own two wheelbarrows that came with the place I bought. They are both orange and have some miles on them. The slightly younger one, Henry, has been my constant companion this summer. He's stood the test of time and feels comfortable. I'll bet we even listen to the same music. The other one, Mr. Chalmers, I found lying in the grass next to the shed. He's somewhat older. Alas and alack, he was last used to haul cement and his wheel has seen better days. I shan't be able to employ him any time soon., but I know he's here and that's all that matters.

I'd like to honor his many years of service to this lovely place I now call home. He appears a little rough around the edges but his gentility still comes through even in his declining years. Here is my visual homage to him, which I've titled, "The Ballad of Mr. Chalmers." 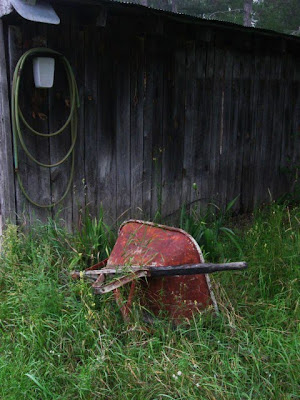 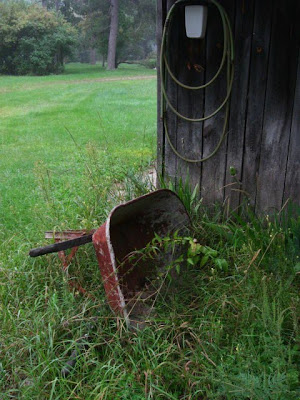 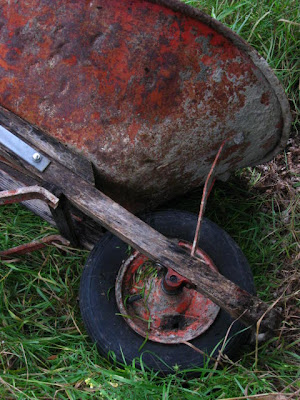 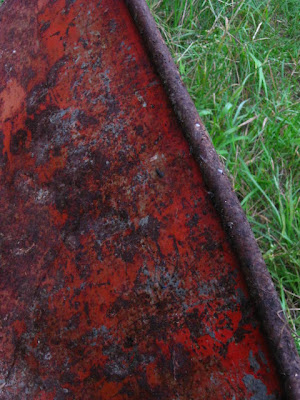 To borrow from William Carlos Williams:

So much depends
upon 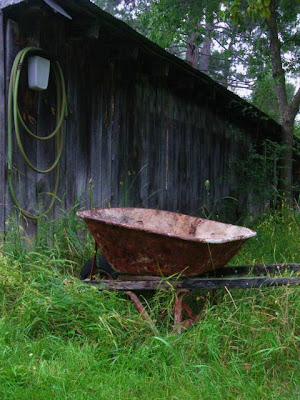 Posted by Teresa Evangeline at 12:34 PM