Of Mice and Men and Men with Chickens 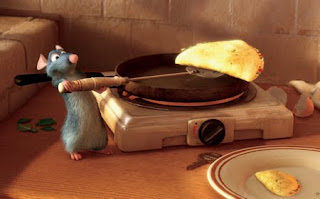 So, I walk into the local hardware store and I say to Norm,  'I need D-Con and a roaster.'  Then add,  'They are completely unrelated items.'  He breathes a small sigh of relief and escorts me to the mouse-killing department. Actually, I'm hoping I won't have to poison them, but they will see that all too familiar yellow packaging (it must be ingrained in the national mouse psyche by now) and retreat to the great outdoors. I know all about "creatures great and small," but I spent a year sharing a house with a pesky little critter who crossed boundaries time and again, much to my consternation. I was living in Santa Fe at the time, on the edge of an arroyo, where coyotes serenaded me night after night, shirking their duties as they sang. I made allowances. Many nights, while reading, I would have the sensation of being watched, only to look up and see the mouse sitting on his haunches, tiny paws held in grateful pose, saluting me before heading back outside, under the door from whence he came. It was almost a nightly ritual. He looked exactly like Remy, the Disney movie rat, who knew how to whip up a mean ratatouille, thus the movie's name.

Anyway, Norm and I get into a brief discussion of bags vs boxes. I decide on boxes, and we head up front to find a roasting pan. I select one based on the size of the large pasture chicken I bought at yesterday's Farmer's Market. Large chicken, small turkey, same, same. I bitch about the price for a second or two, long enough for Norm to remind me, "But just think about all the good times you'll have."  'Yeah,' I agree, 'The fun never ends.'  Then we do the money exchanging thing and I head out the door.

I love shopping locally. I like spending money at a business that has existed on the same corner longer than I've been on Planet Earth and I like talking with someone I've known since elementary school, someone with a down-home sense of humor, not unlike my own.

Next stop, the local used bookstore, where I peruse the shelves for about half an hour and come up with three, a nice mix of approaches that seem disparate, but yet, somehow, dovetail. My choices: Country Matters, by Michael Korda, who has a witty style I've long admired, where he writes about owning country property. The first chapter is titled, "He Don't Know Shit About Septics,"  but it was Chapter Eleven that captured my attention,  "Where Every Prospect Pleases and Only Man is Vile." I think it's going to be a fun read. The other two are of an only slightly more spiritual nature, Hugh Prather's, Notes on Love and Courage, and, Hua Hu Ching, The Unknown Teachings of Lao Tzu.

From there I go to the liquor establishment in a small town just down the road, about five minutes away, to purchase a bit of liquid refreshment, a jug of sangria. I'm particularly fond of this store because it's also where I pick up my farm eggs.  I discovered this additional grace when I went there earlier this summer, saw the sign at the counter and inquired about them. Back into the cooler he went, and out he came with a dozen eggs, very organic, in pretty pastel colors, soft blue and green and pink, along with the usual brown. Different chickens lay different colored eggs. Did you know that?  I discovered it when my friend, JB, raised a few of them, Araucanas, along with some crazy looking hens who look like they're wearing fright wigs. White-crested Black Polish. Seriously. Here's one of them. She looks like Cher, heading for the Oscars: 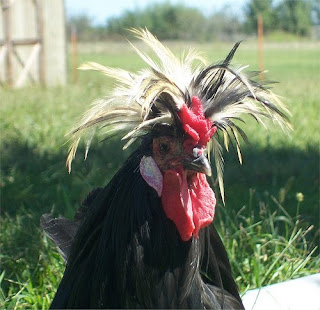 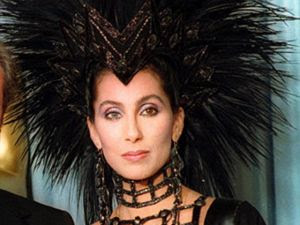 Or this poor dear, who seems to be having a bad hair day: 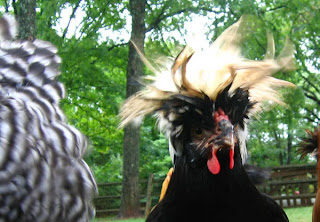 Anyway, among those pretty pastel eggs, there was an extra large, and I do mean extra large, brown and white spotted egg. It looked like an appaloosa horse might have laid it. If horses laid eggs. 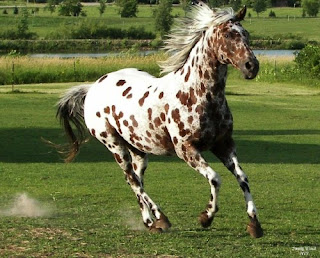 I have no idea what laid it. It could have been a pterodactyl. Tasted good, though. Next time I'm at the general store, perhaps I'll inquire as to what bolts of cloth they might have in back.

Today was the perfect day to stay present to each moment, find joy in simple pleasures and be grateful for good neighbors. We spent some time together this morning, over coffee in their kitchen, talking about community, about all the small decisions we make in our day-to-day lives that add up to a healthier way of life. They loaned two books to me that I was intrigued by: Your Money or Your Life: Transforming Your Relationship With Money and Achieving Financial Independence, and, Slowing Down to the Speed of Life: How to Create a More Peaceful, Simpler Life from the Inside Out.

Tonight, with windows wide open to the night air, as the leaves lift, then settle, with each wave of a late summer breeze, one of my favorite writers tells me all I want or need to know, in this moment:


On waking after the accident
I was presented with the "whole picture"
as they say, magnificently detailed,
a child's diorama of what life appears to be:
staring at the picture I become drowsy
with relief when I noticed a yellow
dot of light in the lower right-hand corner.
I unhooked the machines and tubes and crawled
to the picture, with an eyeball to the dot
of light which turned out to be a miniature
tunnel at the end of which I could see
mountains and stars whirling and tumbling,
sheets of emotions, vertical rivers, upside
down lakes, herds of unknown mammals, birds
shedding feathers and regrowing them instantly,
snakes with feathered heads eating their own
shed skins, fish swimming straight up,
the bottom of Isaiah's robe, live whales
on dry ground, lions drinking from a golden
bowl of milk, the rush of night,
and somewhere in this the murmur of gods --
a tree-rubbing-tree music, a sweet howl
of water and rock-grating-rock, fire
hissing from fissures, the moon settled
comfortably on the ground, beginning to roll.

~Jim Harrison, from The Theory and Practice of Rivers


Posted by Teresa Evangeline at 12:00 AM