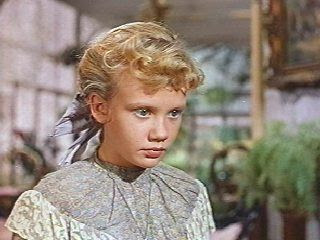 Well, I spent the week deep in denial, hoping against hope that the next subject I would write about would not be politics. I promised myself when I started blogging that I would try to keep any strongly political posts to a minimum. I have wanted to stay outside the fray, not get caught in the machinations. And I've done fairly well, so far.

As you probably know, I talk a lot about hope and change, change for the better. I even believe in it and try to practice it every day. Again, I've done fairly well, so far. Today, I'm struggling to hold my head above water. It seems I've sent my inner Pollyanna away to camp for a week or two. 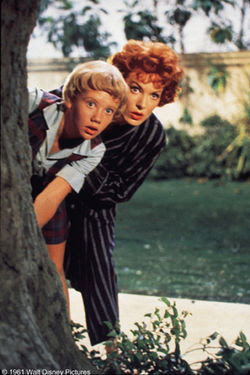 But, instead of having fun, participating in all sorts of mayhem around parental issues, she's found herself in what appears to be basic training. Pollyanna, meet Private Benjamin. 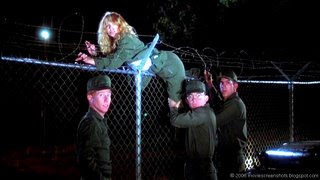 No merit badge again this week.

First of all, I'm having trouble with an America that appears to be schizophrenic (in the traditional, not clinical sense). We swing from a vicious pendulum, not knowing what we want. We just know we don't want what we have. In an age of instant gratification, we want change. And we want it now. Nothing even slightly slower will do. Yes, the economy is in dire straits, and not of the musical variety. But, change doesn't happen overnight, at least not usually, and certainly not in the realm of politics.

I've made a few notes, appropriate for the occasion. Such as this one from our old pal, Bertrand Russell:  "The trouble with the world is that the stupid are cocksure and the intelligent are full of doubt."  Remind you of anyone we know?

I wonder what Aesop would have to say ...  Oh, yeah, "We hang the petty thieves and elect the great ones to public office."

Then there's the quote erroneously attributed to our man, Gauis Petronius Arbiter, c. 27 - 66 AD (Boy, they don't name 'em like that anymore, eh?). Anyway, apparently he didn't say it, some soldier in Korea or such is now attributed with it, but I like to tinker with reality now and then, and it could have been said by Gauis Petronius (heck, it could have been said by David Petraeus), so for the sake of my point, let's pretend it was spoken by Arbiter himself. It is just so timely. Like, suitable in any time.  He said, "We trained hard ... but it seemed that every time we were beginning to form up into teams, we would be reorganized. I was to learn later on in life that we tend to meet any new situation by reorganizing; and a wonderful method it can be for creating the illusion of progress while producing confusion, inefficiency, and demoralization."  Is any of this ringing a bell?  I'm hoping the answer is 'yes.'

I'm also having trouble with an America which stands to lose the most from the conservative agenda, always voting these folks back into office. Again and again. It's not like they don't have proof. I swear, a bunch of cave people, sequestered for the last few years, were released to vote this past Tuesday. Apparently, we haven't been hit hard enough. We're so curious to see what rock bottom looks like, we're doing all we can to ensure that we get to see it.

I'm also wondering, how can a state, that state being Minnesota, which elected Al Franken to the Senate, writer of such should-be classics, Lies (and the Lying Liars Who Tell Them), and, Rush Limbaugh is a Big Fat Idiot, also elect Michelle Bachmann (to the House)?  How can this be?  And not once, but twice, in Michelle's case. Heavy on 'the case.' And, we're not going to talk about the pink feather boa wearing ex-wrestler we elected governor. I still like Jesse. I still think it was a good idea. That didn't work out. The good folks of Lake Woebegone couldn't handle that much change. I go away to Santa Fe for a few years and come back to Tim Pawlenty. As in Pawlenty of bullshit. As of this writing our new governorship is still in limbo between Mark Dayton and Tom Emmer. Emmer referred to Bachmann as his "mentor."  I can't even go there.

Instead, let's look at a couple more outspoken folks who say it better than I. And they can't get in trouble. They're dead. This is one of my favorites: "Democracy is four wolves and a lamb voting on what to have for lunch."  Ambrose Bierce

Here's another of my favorites: "Anarchism is not a romantic fable, but the hardheaded realization, based on five thousand years of experience, that we cannot entrust the management of our lives to kings, priests, politicians, generals, and county commissioners."  Edward Abbey

I suppose I should quit while I still have the illusion of being ahead.

But, nooooo. Not me. 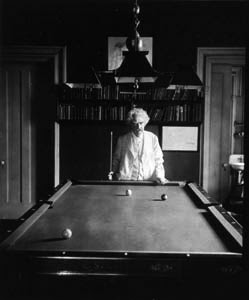 So, while we're at it, or I am, let's hear from Mark Twain:  "If Christ were here, there is one thing he would not be: a Christian."  I'm just sayin', there's a whole lot of folks out there who are not practicing what they preach. Yes, I know, I'm one of them. Please bear with me. I'm using this self-granted, once-in-a-blue-moon, free rant pass, while those folks will still be delusional, mistaking their "Onward Christian Soldier" attitude for the Truth, and taking it all the way to the White House. And that's scary.

I am not anti-Christian. Quite the opposite. But, I do have a problem when people don't demonstrate the tenets, as taught by Christ Jesus, but instead hijack a term for political gain, i.e. power, all the while demonstrating intolerance, prejudice, and hatred. Uh, folks, the Bible says, "God is Love." It really doesn't get any clearer than that.

I know, I know, I'm not practicing what I preach. How do I love both Al and Michelle?  It's just soooo hard sometimes.

I was going to write about skipping down a woodland trail a few days ago, happy and hoping, despite all sorts of evidence to the contrary. What I was doing was hanging on to hope for dear life. And I will continue to do so. I'm a hope-a-holic. If there's a cure, I don't want it. There's a lesson in everything and we'll just have to see what this one is. Really, what else can we do?

I saw a quote by Martin Luther King, Jr. the other day, and realized it spoke to me, asking me to drop my resistance to writing this. He said, "Our lives begin to end the day we become silent about things that matter."  This matters.

Next time we have a desire for change, let's be careful what we wish for. And how we state it. 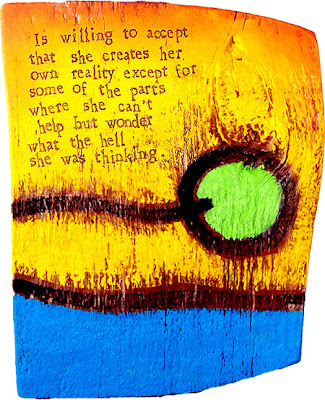 I'll leave you with one more saying, a Turkish proverb, it goes: "If you speak the truth, have one foot in the stirrup."

I have to go check on Pollyanna, see how she's doing at that crazy camp. 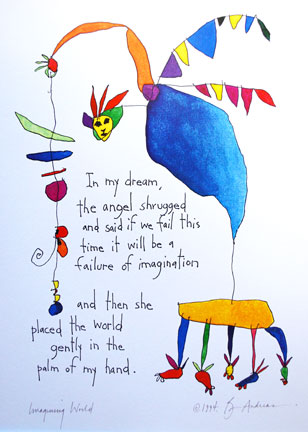 In Pollyanna, as well as The Parent Trap, a movie set at camp, the main characters are portrayed by Hayley Mills. I was a big fan when I was young.

The wooden plaque and the bottom image are by Brian Andreas.

And, we all know Mr. Twain. If you don't, you've been living in a cave.

Posted by Teresa Evangeline at 10:03 AM