The Cave You Fear to Enter 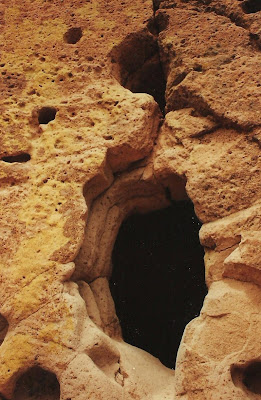 The cave you fear to enter holds the treasure you seek.
~ Joseph Campbell

The second year I lived in New Mexico, I lived about twenty miles north of Santa Fe, in a little area called El Rancho. I know, it sounds like a no-star motel on the edge of the Mojave Desert, but it was a small settlement of folks who had probably lived there, or their families had, for a good many years. It is situated between two mountain ranges: the Sangre de Cristos to the east and the Jemez to the west. The views were outstanding and the sunsets to die for. Well, maybe not to die for, but they were awfully nice.

Perhaps it's the four fresh inches of snow outside my window, and more coming down (which I don't mind a bit; it's sort of nice and cozy), but I've found myself mentally wandering around in the area near the Jemez. It holds some wonderful hiking and exploring opportunities, which JB and I took full advantage of (JB and I were divorced by that time, but were working out our friendship). It was a playground of fine proportions. 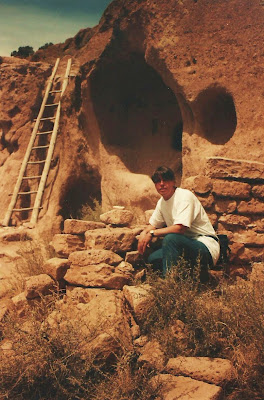 Just up the road a few miles was an outlier of Bandelier National Monument called Tsankawi. It's one fine walk, culminating in some pretty spectacular views of those same two mountain ranges, plus the Pajarito Plateau. The real pay off is the Anasazi habitation site at the top of the climb, almost a thousand years old, complete with remaining evidence of their lives: pottery sherds, depressions where kivas had been, and some low rock walls. On the sunny side of the hill are several small caves and even a few petroglyphs.

Across the road from Tsankawi, caves that were once inhabited by other folks who had lived there line the face of a cliff made of volcanic tuff. They provided several other days worthy of exploration. These were not deep caves, just large rooms carved out of the soft rock, large enough to provide a living space, a place safe from the elements, where they could keep an eye out for uninvited visitors. Several of these were connected inside by narrow passageways. Black charred ceilings gave a sense of their very spartan lives. 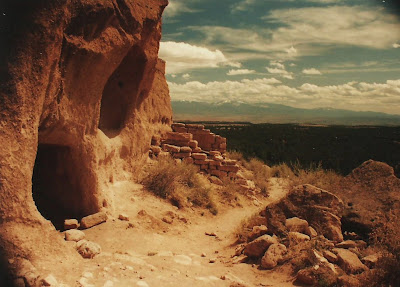 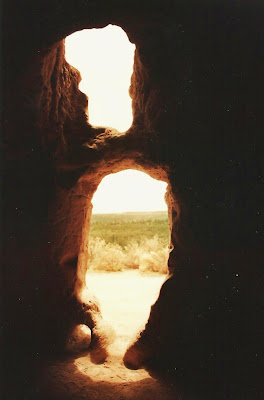 We once set aside our fears of scorpions and other inhabitants, sat down inside one of them and had lunch. Looking out from inside gave me an acute sense of history and the Anasazi who had lived there. 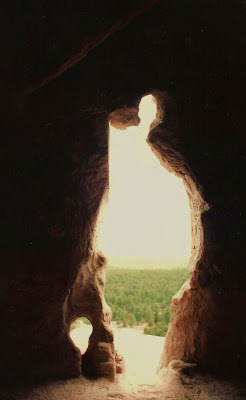 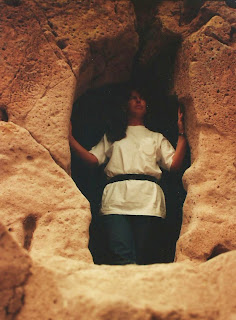 This morning, looking out at the snow and thinking of these caves, the opening quote by Joseph Campbell came to mind. I posted it on my Face Book page, back when I had a Face Book page. I wanted to share it here, as well. It's a reminder to not be afraid to look inside, to explore the interior of my life, along with the exterior, and the ever-expanding possibilities that are there. 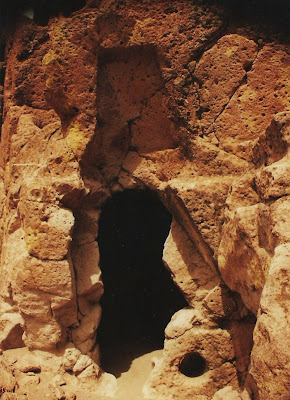 Note the small spiral petroglyph in the second photo of me, just to the upper left, a common symbol found among rock carvings. The circle of life? A symbol of time? Just one of the mysteries that makes exploring their history great fun.
Posted by Teresa Evangeline at 3:02 PM