Ode on a Cast Iron Pan 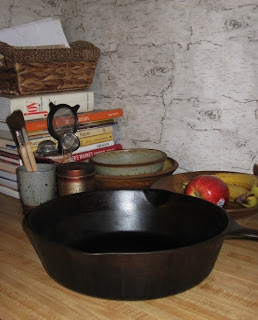 This morning, while making breakfast in a cast iron pan, I thought of a friend whom I haven't seen in over a year. She lives about two hours east of here, and I rarely get over that way anymore. When I first returned to Minnesota, I stayed with another friend who has a double geodesic domed home over that direction and I met some really cool people while I was there, including this gal. I wrote about her when I first started blogging, before anyone read it but me. I have never actually supplied a link to a previous post, although I have mentioned a couple of them when I felt it was apropos, but I'm making an exception, because I want to remember this friend and that wonderful day we spent together, and I'd like you to meet her, too, through this post.

At the end of the day, she said how grateful she was for all the help I had been, and although I was having a great time and had no  intention of being reimbursed in any way but with a great memory, she would not be dissuaded, and so I went home with a crazy cool cast iron fry pan that makes me happy every time I use it. I grew up in a house where we used nothing but, and I'm betting many of you did, too. It's actually a cross between a fry pan and a dutch oven, so it's versatile, and I simply love it.

Here's the link (the title alludes to the post before): teresaevangeline.blogspot.com/2009/09/i-warned-you.html


A good friendship and a good cast iron pan just seem to go together. And I think it's time to re-season both.

Posted by Teresa Evangeline at 1:37 PM