Next of Kin to the Wayward Wind 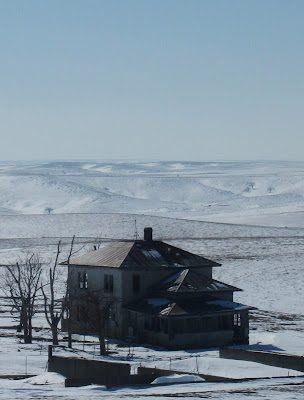 There's a crazy wind blowing around out there tonight, making the natives restless ... Buddy, mostly. Earlier he kept coming up to me with this stricken smile ('cause goldens rarely stop smiling), as if to say, "Please, make it stop, Ma." He wanted to go outside as it's his favorite place to be but the wind was whipping up the scent of something and he didn't like it. When he stuck his nose out I thought I heard the dim call of a coyote or two, so I suspect that's the cause of his reluctance. I finally put him in his crate and I think he prefers it; there's a more peaceful and protected feeling there. Hope he doesn't have to pee anymore tonight.

Early this morning, as we turned the page to a new chapter, I awoke with a call to sweep the kitchen floor. It has a sense of parable about it, doesn't it?  Rumi mentions it in at least one of his poems and Christ Jesus mentions it a time or two if I'm not mistaken. I would imagine it holds a place in many traditions, spiritual and otherwise. So, I swept out the old and, in doing so, prepared for the new ... whatever that turns out to be.

Not so new is this recording by the great Patsy Cline. Several folks recorded this song, but this is the one that helped raise me and I prefer it.  I pretty much prefer anything sung by Patsy. BTW: The photograph is one I took on the road to Valentine, Nebraska as I drove out west last year. I take its picture every chance I get. Talk about the potential for wind ... Anyway, without further ado, here's Patsy:

Posted by Teresa Evangeline at 10:48 PM