The Land Along the River 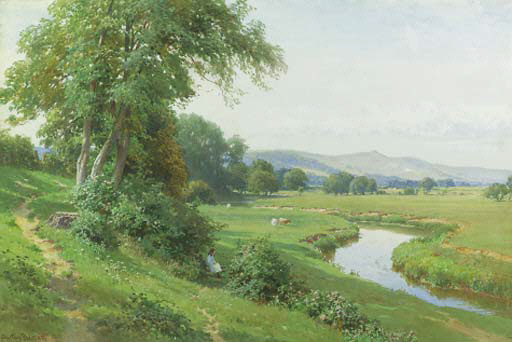 Sometime during the night I had a dream in which I was floating down a river in a very small wooden boat, the kind one might have taken into a duck blind, say about sixty years ago, not unlike the one turned upside down behind  our garage when I was growing up. Several people were in the boat with me, it was pretty crowded, but everyone was very quiet, there wasn't a sound. We just drifted down the river, which was really more of a creek. None of us had an oar or a paddle. I looked behind me and there were several more boats all floating down the river, very crowded boats, and no one had any paddles.

I was watching myself from a very short distance away, as I usually do in my dreams. Some aspect of myself was following the boat I was sitting in as it moved down the river. There was a green, grassy bank on both sides. It felt very peaceful, but yet, I knew something wasn't right. It was too quiet. Did any of us know where we were going?  It didn't seem so, but no one was talking. We were just silently drifting along.

I started looking around me, the me in the boat, and I realized that the water wasn't very deep, in fact, it was very shallow. I knew I could choose to step out of the boat whenever I wanted to. And so I did. I simply stood up and stepped out. I found myself standing in water that was just above my ankles. I stood there and watched boats go by me, no one said anything. I just watched them go down the river, boat after boat filled with people sitting quietly. The sun was shining, the sky was blue, everything appeared to be calm and peaceful. But, I still knew I didn't want to continue down that creek. Then I realized that the grassy bank along the river was just a few feet away. I could easily walk over to it and stand on the bank. And so I did. I walked over and stood on the very green grass just above the river. I stood there in the sunshine with a light warm breeze on my face as I watched the boats go by.

I thought briefly about why everyone was choosing to continue down the river without question when they, too, could get out of the boat they were in, walk over and stand on the bank.

Then, I found myself awake and at peace. The grass on my land along the river is very green.

But, I'm left wondering about the others still in the boats, still on the river, not questioning.

They're awfully quiet.  Too quiet.