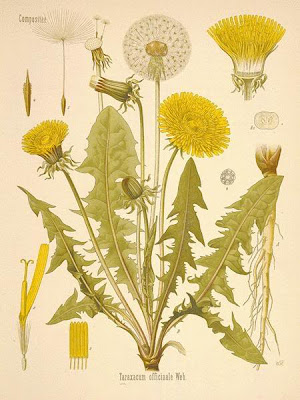 Where I grew up on Rural Route One lawns were things on which we played Simon Says, Red Light Green Light, and Captain May I. Nobody thought twice about dandelions on the lawn. We didn't use the greens for salads or the roots for tea, but they were used to decorate some pretty awesome mud pies if I do say so myself. I lined them up on a board and let them bake in the sun. My grandfather, Moses, paid a whole nickel for one particularly stunning creation. Other days I was paid with a stick or two of Juicy Fruit gum. That was before I found out that dandelions have other, more powerful attributes.

Enter Uncle Allen. Allen was Aunt Gertrude's husband, one of several through the years. I don't recall where he was in the line-up but I liked his quiet demeanor. Plus, he made some potent dandelion wine. How do I know?  Well, my sisters and I were waiting for a ride to the Purple Peanut one Saturday night, our tee-totaling parents were away, and one thing led to another, as these things do.  Next thing I knew, we'd popped the cork on the dandelion wine stored way in the back on the bottom shelf of the kitchen cupboard, glasses had come out and that sweet summer goodness was poured.  Not much.  It didn't take much.

Shortly thereafter, I'm standing at the kitchen window keeping a vigilant eye out for headlights, apparently saying some pretty engaging stuff as I had my sisters in giggles. I did some giggling of my own and then our ride showed up. How I felt was nothing I was familiar with, I just knew things seemed a little odd and I found I could watch myself from a short distance away. Half an hour later and twenty miles down the road we arrived at the Purple Peanut, the dancing commenced and life went on. No prices were paid, none that I recall; maybe my sister, Chris, took the fall.

Later that summer, very early in the morning, Mom came into my bedroom to tell me they were leaving for a few days. They had received word that Uncle Allen had drowned while fly fishing on a river in Idaho. He had slipped on some rocks, his waders filled up, and the river took him away. Aunt Gertrude watched in despair, helpless on the shore. She came to visit us some time after and I remember her sitting in a chair, very quiet, in the dim afternoon light.

In the late 1950's, Ray Bradbury wrote a book of somewhat autobiographical stories called, "Dandelion Wine," sort of a metaphor for the bittersweet joy bottled up in one youthful summer. I've been thinking maybe next year I'll cook up some summer in a bottle and, in the winter, when the wine is ready, I'll pour a glass for myself and one for Uncle Allen. We're all moving down this timeless river, still together, with nothing to fear and no reason to grieve.

So, here's to summer: dandelions and mud pies, rivers and Captain May I, and dancing at the Purple Peanut late into the night, 'til the river takes us 'round the bend, and out of sight. 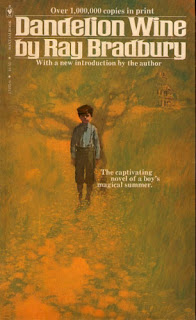 Posted by Teresa Evangeline at 6:17 PM