Old Homesteads, New Marshes, and Blackbirds on the Wing 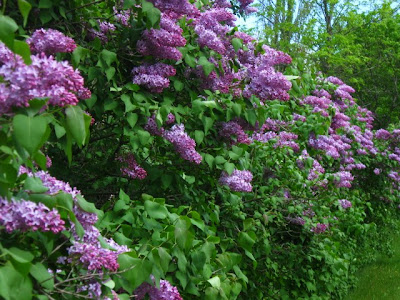 Buddy and I have decided to make a morning walk part of our day, a ritual, if you will. He was all for it. I needed more convincing. But, I'm glad we reached an agreement, not a compromise, an agreement. We Will go for a morning walk. He takes the lead with the leash in his mouth as though he's just the best little helper on the planet. At some point this walk turns into a run. His ears are flapping, big old smile on his face as he looks back over his shoulder to say, "Isn't this fun?  I told you you'd like a morning walk."

This morning our walk led us to my place near the river. Buddy spotted the water under the small foot bridge and wanted to jump in. I didn't let him, thinking how muddy he would be. Later, I realized I should have let him be a dog and have some fun. So tomorrow he gets to jump in. Should be interesting.

Down the road a piece, Buddy had to check out some smells that only he could smell along a deer path leading into a marshy area along the river. Wild columbine lined the path. We lingered there for a few minutes until all of Buddy's senses were sated, then moved on.

Just as we were going to turn back, I realized the small side road where we stood led to an old homestead. The road itself wound alongside a long-abandoned gravel pit. A marshy area was at the bottom of the pit and several red-winged blackbirds were taking off and landing among the rushes and cat tails. An entirely new little ecosystem had formed in this gravel pit. Buddy and I stood on the edge and watched. We held a silent conversation about time and birds and life's journey, just a few brief ideas held together in the silence, punctuated only by birdsong in the marsh below.

We walked further down this old road, with grass growing in the middle, leading to what must have been the home site at one time. We stood in the tall green grass and listened to the history of the place, the few simple kernels of truth that still exist there, left behind by those who once slept in their beds beneath the stars inside that old stand of cottonwoods. After a few minutes we both quietly turned and walked away, leaving them in peace.

On the way back, Buddy decided it was time to run again and so we ran. The wind was rising, the sun peeking out from behind the clouds only now and then. As we reached the edge of Lonewolf, we stopped and picked a few sprigs from the old lilac bush that stands sentry on the corner. Well, I picked. Buddy rolled around on the ground beneath it, delirious from the scent.

Now, he's all pooped out and sleeping at my feet, dreaming, no doubt, of lilacs and deer poop and blackbirds on the wing. 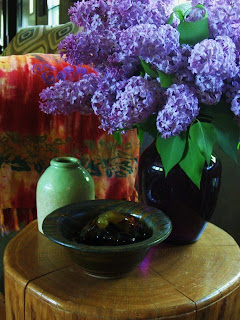 Posted by Teresa Evangeline at 12:12 PM