Dreaming of Sitting Bull Along the Missouri River 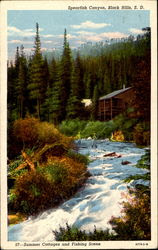 Writing about the road, especially the one heading west into the Badlands and then the Black Hills, reminded me of the many trips I've taken into that part of the country. In 1975, the summer I graduated from college, my older son, Trevor, his dad and I, headed out west for the very first time. I wanted to see more of this country and share it with Trevor. It was a chance to enlarge our views through new experiences. I had longed to go there for so many years, with the Black Hills something I held in my imagination as magical. The energy there is said to be very good, although a bit wonky in spots. I don't know what it can truly be attributed to, but the Native Americans have long held the belief that it is, indeed, a special place. I felt it to be so. I also believe that the original inhabitants of a place can create a certain energy from the lives they lead.

Two trips out there were actually just going through, only a couple of days and then onward. They were in mid-August, motorcycle rally time in Sturgis. And a lively crew they were. I was young and fantasies of being a biker chick still had that bad-girl appeal being young allows for. Bikes lined the street with The Bodega as the preferred watering hole.

It was great fun checking into the Franklin Hotel on Deadwood's main street. It's been around a good long while, but then it still had an old west appeal to it. Big lobby, big staircase, and rooms that begged for an old metal bathtub to wash the dust off after a day out on the trail. 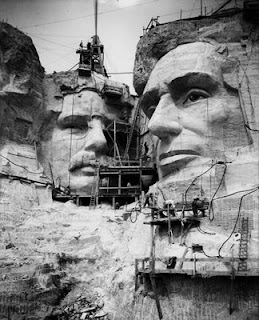 It's always exciting, discovering new places. The many small roads winding through the hills reveal crystalline lakes, mule deer and mountain goats, just down from Mount Rushmore. The drive on Needles Highway is worth the price of admission to that beautiful country. And, for whatever reason, those faces carved in granite speak to me, always have. It was a magnificent undertaking Gutzon Borglum began. His story enchants me still.

The second time through we set up camp on the edge of Deadwood. Our fellow campers were an interesting mix of families and bikers. It rained one night, cats and dogs, but that was okay. We were having an adventure and that's all that mattered. The following morning, though, our neighbor, a lone biker from Colorado with whom we had chatted the evening before, was not in camp although his stuff remained. We heard a biker had been killed on the road during the night. I have always hoped it wasn't him, but that he'd gotten lucky the night before and was having breakfast with a lady he met at the Bodega. His stuff could wait. 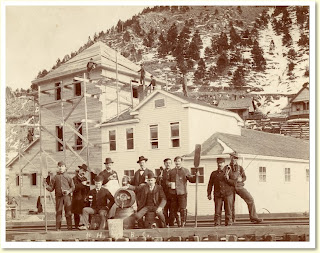 Deadwood itself is nestled among the hills which once held a large population due to the gold discovered in them thar hills. Old miners houses remain on the sides of these hills, hanging on for dear life. The Chinese opium dens are still there, not in full operation, but you can tour them if you're of a mind to do so. It's an interesting part of the history of the place. There's a pretty good museum containing information and artifacts that's fun to wander around in.  The streets aren't really designed for car traffic, walking is the only way to soak up the ambience.

Black Hills gold jewelry is everywhere, of course. Many years ago I went on the road and sold it to stores in the upper mid-west along with the turquoise and coral jewelry that had a strong resurgence back in the '70's. It was a less than happy time in my life, so will write more about that, perhaps, when I feel more ready than I do now. Some times are meant to stay back there where they belong. 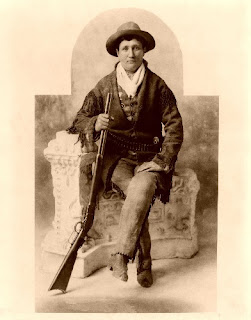 Calamity Jane and Wild Bill Hickok, among others, are buried in Mount Moriah, the Deadwood cemetery. In the years we first arrived it was an old unkempt cemetery and you could wonder around, find these gravestones for yourself and marvel at the beautiful setting on a hillside. Several years later, when there again, it had been destroyed by gentrification. New tombstones, and so clean and spiffy you might as well be on the sidewalks of some model city. They were charging admission to the cemetery! Another tourist trap as dead as its inhabitants seem to be. More weird white folk stuff. I shall resist a rant. A long one, anyway.

Deadwood, unfortunately, has now become another gambling destination with many of the old hotels, including the Franklin, reborn as casinos. Everyone has to make a living, but I believe it's greed that is the draw and not usually set in motion by the locals, shall we say. Kevin Costner, after filming "Dances With Wolves," opened up one with his brother in one of those old hotels. The walls were lined with plexi-glass cases containing his costumes from that film, as well as "Robin Hood." It was nice, seeing the costumes, the fabrics, the intricate needlework. I'm a bit of a costume and by-gone era clothing freak, but it left a bad taste in my mouth. Deadwood was ... dead. Its soul gone missing.

Back then, in the '70's, we were on our way further west, heading for Cripple Creek, Jackson Hole, Yellowstone, and other places I'd only then read about and wanted to experience. They are subsequent stories. The story of Cripple Creek is, unfortunately, a similar case of greed creating a town through gold mining. It, too, eventually evolved into a magical place in the in-between time, and then, once again, greed returned on yet another search and destroy mission. 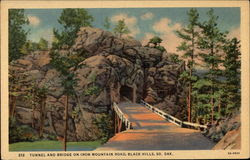 Rather than get into that too deeply, I will return to what called up this memory and brought me to the keyboard this morning. My younger son, Coleman, was just about to go into fifth grade and the two of us were camping up at the top of one of those roads leading to Mount Rushmore. It was along a small creek, a very green and sunny place. There were donkeys hanging out along the road that would sucker cars into stopping long enough to beg for food. Herds of buffalo often crossed the road right in front of us. They are truly awesome creatures and have long held a great and mysterious appeal to me. The love I have for them deserves its own blog. And I will, soon.

We spent a few days exploring the back roads just to see where they'd take us, what new vistas awaited. We took a ride on an old locomotive through the back country as well as a tour down into Wind Cave. Wonderful fun. We imagined ourselves spelunkers, peeking into every nook and cranny we could get away with. Later that night we sat among some boulders and watched the light show on the faces of Rushmore with tourists from all over the world. We did all the usual things you do there, including a visit to the Crazy Horse monument, still progressing but very slowly. You could pick a rock from a pile inside the museum that supposedly came from the creation of it. We took a walk through the museum and then each selected one for our journey home.

We were returning via the northern route through South Dakota; a long day on the road and endless golden wheat fields. It was beautiful in its own infinite way. Two old trucks with flat beds were sitting alongside a hill, one red, the other turquoise. They looked as though they had not moved from that spot since sometime back in '53. Against that golden wheat they were a sight to behold. It's one of the special memories of that time, of that trip. 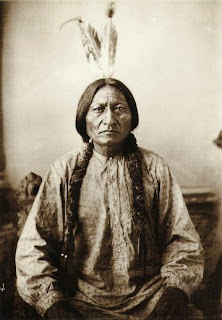 The other was arriving at the Missouri River just before dark and realizing that Sitting Bull's grave site, the one where his body was brought to and reburied in 1953, was sitting up on a bluff overlooking the river a couple of miles off the road. We could make it just before dark. We wanted to pay tribute to this courageous historical figure who had played a pivotal role in the lives of so many Native Americans, particularly his fellow Sioux. He had lived most of his life just a few miles east of there.

When we arrived, right at dusk, a few people were leaving and then we had it all to ourselves. The monument is a bust created by the sculptor, Korczak Ziolkowski, of the Crazy Horse monument. Several visitors had left articles in homage at its base; images, writings, including poetry, pouches with bead work, tobacco. We were discussing what we could possibly leave when Coleman took off on a gallop back to the car several yards away.  He returned with his rock from the Crazy Horse monument. I was so pleased he had thought of it on his own. A very fitting tribute it was. He placed it at the base and then we stood in silence as darkness fell.

On the way back to the car we quietly talked of both Sitting Bull and Crazy Horse. We hoped both were at peace. Then, we drove across the bluff and into town after dark where we stayed for the night, sleeping and dreaming somewhere along the river.

I did not include a photo of Crazy Horse, as there are many bogus photos in circulation. He did not ever want his photo taken. Some say there are no true photos of him, and so I chose to honor that.

Posted by Teresa Evangeline at 4:14 PM